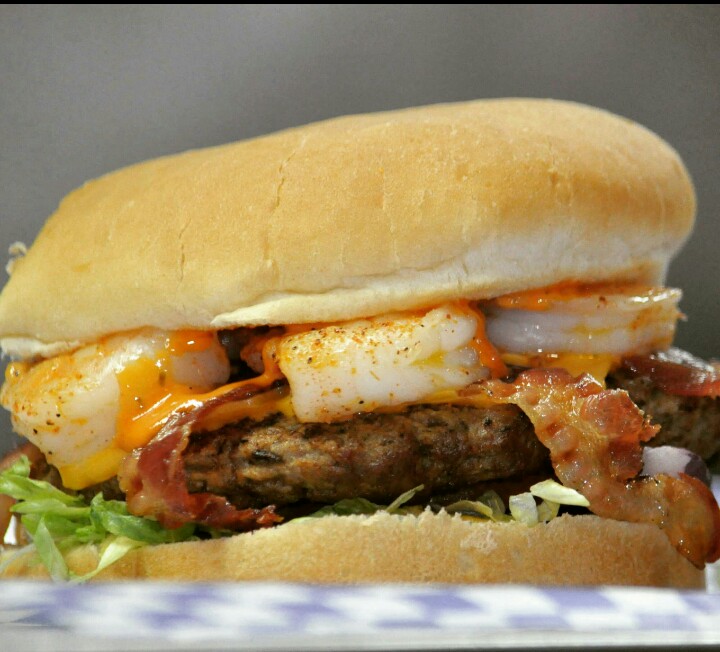 Heard’s BBQ and Soul Food in Maplesville has earned a spot in the Alabama Cattlemen’s Association Bama’s Best Burger.

After being nominated, Heard’s Surf-n-Turf Burger received 76 percent of the vote against Vick’s Lunch Van with 1,100 votes cast in four days.

This is the second year in a row for Heard’s BBQ to make it this far in the competition. The winner will be announced on Sept. 30.

Owner Roman Heard said the support of his customers is something he does not take for granted.

The restaurant’s customers have nominated it for four different state wide food competitions for various items on the menu.

In almost every instance, the restaurant made it to the finals.

“I don’t think many other people have really done that, so I don’t want to take that for granted,” Heard said.

The Surf-n-Turf Burger is one of multiple items created by Heard’s enjoyment of seafood and meat. The burger starts as an all-the-way bacon cheeseburger.

“Where it’s different from other burgers is it has a Sriracha mayo,” Heard said. “… and has some spices on it and it has the grilled shrimp. We take jumbo shrimp and we sauté in Cajun seasoning and put that on top of the burger. It’s a high-end type of a burger.”

The burger has been on the menu off and on since the restaurant first added burgers.

The winner of the contest is selected by a judge visiting the restaurant and ordering the burger. Contestants will not know the day or which customer it is.

Heard said he likes this format because then judges are truly getting what the customers eat.

“Nobody can alter their burger,” Heard said. “I can’t decide to put a little something extra on a burger that is going to be for a judge, so it is more of a true judgement of what we serve every day.”

Burgers are on the menu two days a week. Heard said since Maplesville is a small community, he varies the menu to keep people from getting tired of the same food.

“It definitely helps business when you can get these like this and get your name out there for different stuff that you do,” Heard said. “Being in business, this is how I take care of my family, I don’t take for granted what I try to serve people … You do the hard work and then you get recognized for it. It makes you feel proud to know people appreciate what you do.”