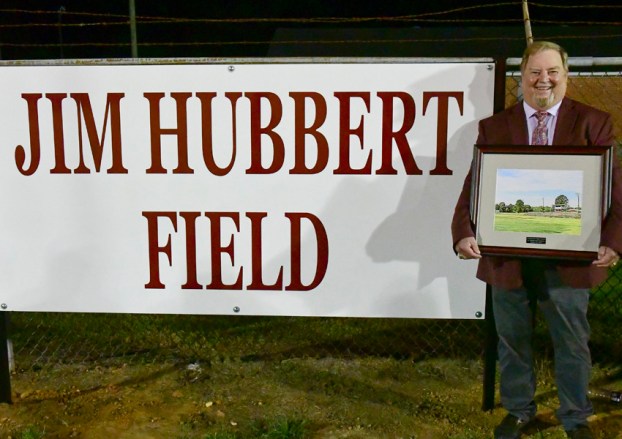 Maplesville dedicated its football field in honor of former head coach Jim Hubbert during halftime of the season opener on Aug. 23. (Photo by Anthony Richards)

The 2019 season opener for Maplesville football will always be remembered, not just because the Red Devils trounced Fultondale, but also because Jim Hubbert was honored at halftime.

Hubbert spent 14 seasons as Maplesville head coach in two separate stints and compiled a record of 144-43.

Several of Hubbert’s former players joined him at midfield during the halftime ceremony.

According to Hubbert, it meant a lot to have so many of his former players there to share in the moment with him.

It was an emotional night for everyone involved, as the memories of the past success flowed freely. 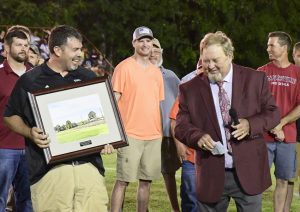 Jim Hubbert shares a laugh with his players. (Photo by Anthony Richards)

Hubbert thanked the Chilton County Board of Education for hiring him twice, a statement that brought about a chuckle throughout the crowd.

Hubbert was the first coach in school history to surpass 100 wins and currently has the second-most wins behind only his son Brent, who carried on the family tradition.

Much of Maplesville’s current success can be traced back to Hubbert.

He led the Red Devils to the 1996 Class 1A state championship following an undefeated season capped off with a 45-6 victory over Lynn to secure the title.

Although there are many memories to choose from, Hubbert pointed to his very first year in 1984.

“I didn’t know it until I got here that they had never been to the playoffs,” Hubbert said. “I was just ready for a head coaching job, and when I got a chance I jumped on it.”

He was hired only a week before the season, but the team eked out a 7-6 victory against West Blocton in the first game.

“We were terrible the first game and had hardly no offense all night,” Hubbert said. “We got a late turnover, scored and kicked the extra point to win the game.” 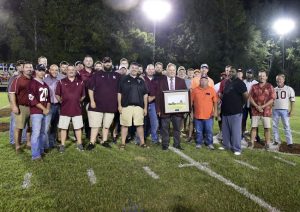 Several of Jim Hubbert’s former players joined him on the field for the ceremony. (Photo by Anthony Richards)

However, he remembers how that team continued to improve with each week that passed and wound up advancing to the state semifinals.

“We kept adding stuff each week, because we just didn’t have time,” Hubbert said. “I got the job on Friday and we started practice on Monday.”

Hubbert vividly remembers the nail-biting victory over undefeated Oakman in the third round of the playoffs that year.

“We just kept hanging around and hanging around,” Hubbert said. “We scored two touchdowns in the fourth quarter in 57 seconds and beat them 22-21.”

The 1984 season helped set the tone for Maplesville’s continued success and created a tradition of winning.

“Those two games were big games with the kids believing in me and believing in themselves,” Hubbert said. “After that it got to the point where me and my assistant coaches would look at each other and just shake our heads wondering how we beat certain teams. It came down to our kids believing that they could win and I think the other team believed they were going to get beat.”

By BRANDON SUMRALL / Special to the Advertiser With all the excitement of a new football season rolling into the... read more