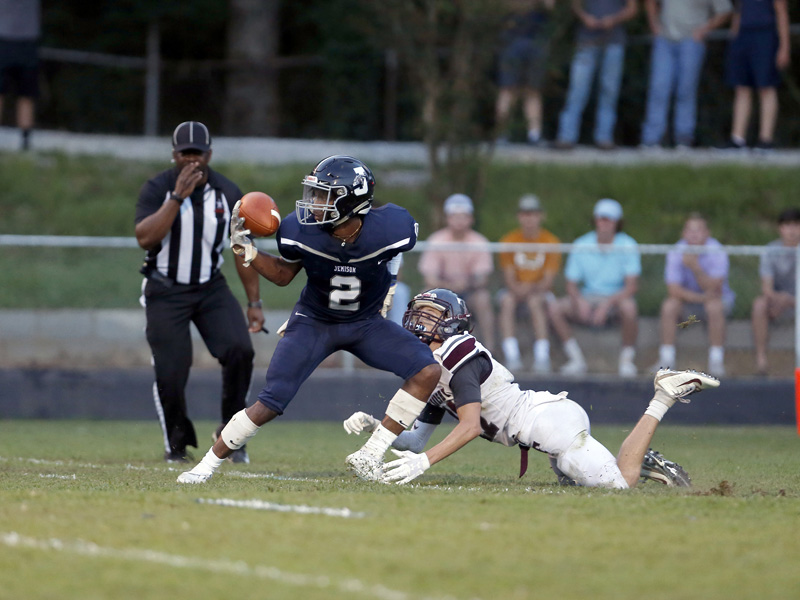 Jemison’s Josh Gilliland hauls in an interception at the one-yard line to prevent a potential Thorsby touchdown during a game on Aug. 22. (Photo by Brandon Sumrall/Special)

The roles were reversed in the 2019 version of the North Chilton Clash with the Jemison Panthers being the team that ran away with the game in the second half after Thorsby had done the same a year ago.

Although Jemison wound up winning 49-20, the game was back and forth early on with both teams feeling out each other and trading scores to make it a 14-all mid way through the second quarter.

According to Jemison head coach Blake Bradley, mental toughness is something that Bradley has preached to his players since he took over the head coaching duties.

“A big stepping stone for us was getting that mental edge back,” Bradley said. “Kids call it swagger, I call it confidence. I think we’ve got it [back] and now we can just build on it from here.”

Some of that mental toughness was on display as the Panthers scored twice prior to the end of the first half and led 29-14 at the halftime break.

The second of those drives helped set the tone for the rest of the game, as Jemison marched down the field after beginning the drive deep in its own end with only 36 seconds remaining until halftime.

Instead of taking a knee and accepting the one possession lead, Daniel Martin connected with Jahvon Simon on a deep ball down the right sideline and Josh Gilliland eventually punched it home to grow the lead to 15 points.

“In the back of my head I knew that Thorsby’s a great team, and I just wanted to take advantage of every little bit we could get,” Bradley said. “We’re not trying to get greedy but we’re just doing what we need to do to put the game away.” 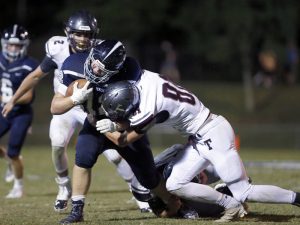 Noah Gilliland of Jemison fights for yards against Thorsby. (Photo by Brandon Sumrall/Special)

It proved to be a statement drive for Bradley and the rest of the team, as Jemison was able to continue its pace in the second half.

Jemison’s offense seemed to have opened up from recent years against Thorsby, and one of the reasons why was the play of Martin who showcased his passing ability time and time again with on target shots down the field.

“Daniel is a coach’s dream,” Bradley said. “He’s a leader on and off the field and does everything the right way in the classroom. We even threw him in at corner tonight, and that kind of thing is irreplaceable.”

Senior Noah Gilliland also had a big game running the ball, including a couple of lengthy runs after breaking through the initial contact at the line of scrimmage.

It was an emotional game for Noah Gilliland, who recently dedicated his production this season to his dad who was diagnosed with cancer.

“I was doing everything for my team and my dad,” Noah Gilliland said. “I look up to my dad and ever since he’s had cancer it has just pushed me even more.”

One of the key factors in the Jemison victory was that it was both sides of the ball that made plays.

A prime example of that was Josh Gilliland who scored multiple touchdowns on the ground but also intercepted a pass.

It was a night full of growing pains for Thorsby who showed serious potential at times but often followed it up with youthful mistakes.

Although the outcome did not go the Rebels’ way it is still a long season and there is plenty of room to grow into a playoff-caliber team.