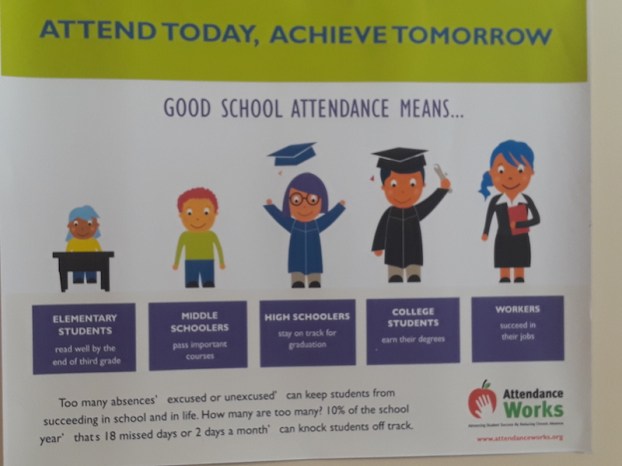 This poster is on display in several places in the community to support Attendance Awareness Month. Posters are available by contacting cbflanagan@chiltonboe.com. (Contributed)

CCS focusing on the importance of attendance

Chilton County Schools is participating in Attendance Awareness Month this month to highlight the importance of students being in class.

On the last state report card, chronic absenteeism, which had been defined as 15 or more absences in one school year, had increased to 20.76 percent of students.

At the time, a flu outbreak was said to be a major contributing factor.

The definition has been changed at the state level this year to 18 or more absences. This includes excused and unexcused absences.

Attendance supervisor Celia Flanagan said there are many factors that can impact attendance.

“A lot of times transportation can be an issue (or) the child doesn’t want to go to school,” Flanagan said. “It could be any number of things. Every case is different, that is why Chilton County is working on taking more hands-on personal approach in addressing each student who is having problems with being chronically absent to establish a relationship with them and to talk to them about why they are not coming to school and what we can do to help them resolve that issue.”

Flanagan is pulling reports for students who have already missed two or more days of school in these first two weeks of school.

“The data that if you miss two days in the first month of school, then you’re more than likely to be chronically absent for the year,” Flanagan said.

Principals will receive a copy of the report, and a letter will be sent home to the parents outlining the importance of good attendance and how parents can help.

“Attendance is the number one indicator for a child to drop out in high school,” Flanagan said. “If they have poor attendance, they are more likely to drop out of school … The more students attend, the higher their achievement level.”

The goal of the awareness month is to help communities see the importance of good attendance and the impact it makes.

“We support attendance awareness efforts and the work of the Alabama State Department of Education to promote attendance at school,” ADMH Commissioner Lynn Beshear said in a press release. “We are proud to partner with community mental health authorities, the ALSDE and local schools to bring mental health programs directly to students so that student challenges can be addressed and appropriately supported, helping them be more prepared to learn.”

ADMH states that “Chronic absences can be significantly reduced when schools, the community, and students’ families work together to nurture habits of regular attendance and address hurdles that may prevent students from getting to school.”

Too many unexcused absences can also have a student and their parents facing truancy charges.

Flanagan said which absences will be considered excused are outlined in the school system’s policy and procedure handbook in line with state guidelines. An absence with a doctor’s note would be excused. Flanagan said parents can also write notes for up to three excused absences a semester.

“At five unexcused absences, they get an early warning letter from me,” Flanagan said.

Those who receive a letter are required to attend a meeting with Judge Chris Speaks.

“He talks to them about the importance of good attendance and what could happen if they continue to miss school,” Flanagan said.

After seven unexcused absences, moving forward with truancy charges, depending on the situation, may be pursued.

Absenteeism is more prevalent for kindergarten and high school seniors in CCS.

Flanagan said kindergarten students miss school a lot because they are still building up their immune system.

“Parents with first-time kindergarteners are sending their kids to school for the first time (and) are not really educated yet on the importance of attendance,” Flanagan said. “That is one of the things I want to do this year is really focus on teaching attendance to preschool and kindergarteners and parents as well about the importance of good attendance early, so that when they get older it is not going to be a problem.”

She said seniors often miss because they are ready to move on to college or to start their career.

Flanagan said attendance affects “achievement, whether they feel connected to the school and school culture, whether they are involved in extra-curricular activities.”

By J.R. TIDWELL Editor Van Smith will be the Republican nominee during the general election for the House District 42... read more