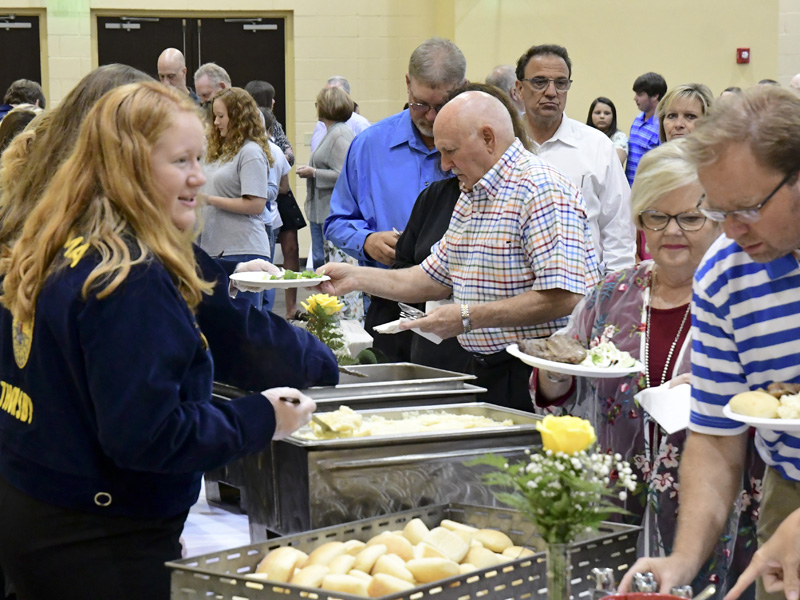 Thorsby FFA is hosting a dinner and auction fundraiser. Doors will open at 6:30 p.m. along with the start of the silent auction, while a steak dinner will begin being served at 7 p.m. and live auction starting at 7:30 p.m. (File photo)

Thorsby FFA will host a dinner and auction event on Aug. 27 to help raise funds for its trip to the 92nd Annual National FFA Convention & Expo in Indianapolis.

The convention will be held Oct. 30-Nov. 2, and Thorsby will have two teams and one individual competing for a national championship.

The teams competing include poultry evaluation and meat evaluation, as well as an individual who will compete in the dairy handlers portion of the competition.

It is the sixth year in a row that Thorsby will have a team competing at nationals.

According to Thorsby agriculture teacher Brian Lucas, he believes that this year is one of the best chances the program has had to bring home a title.

Some of the new items in this year’s auction will include furniture that was handmade by his students.

“We’ve got an entry table, night stand and a little table that you can sit at and play checkers or chess,” Lucas said. “We also took a water trough and turned it into a bench. It’s pretty cool looking.”

The furniture will be added along with traditional auction items, such as golf packages and fishing trips.

“The local businesses have been really kind to donate stuff that we can auction off,” Lucas said.

This year’s dinner and auction will also go through a change in venues with it being held at the Jemison Civic Complex Auditorium as opposed to the Clanton Conference and Performing Arts Center.

He hopes the change will add a more intimate feel and allow for a more personal setting for those attending.

Rianna Green and Carson Littleton are recent graduates of Thorsby High School and will receive their American FFA degree at the convention.

“They had to do a lot to get that,” Lucas said. “It’s the highest thing that you can get.”

Tickets for the dinner and auction are $25 for an individual or $175 for a table of eight.

Doors will open at 6:30 p.m. along with the start of the silent auction, while a steak dinner will begin being served at 7 p.m. and live auction starting at 7:30 p.m.