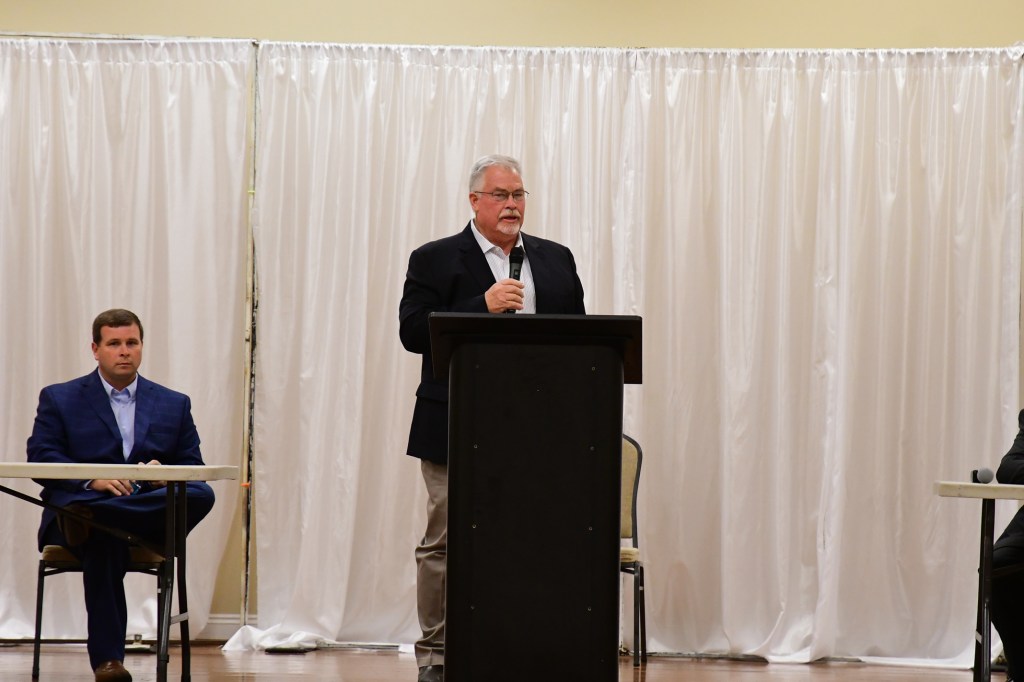 Van Smith speaks during a political forum in Jemison Aug. 19 ahead of the Republican primary for the House District 42 special election on Aug. 20. Smith received over 56% of the vote, meaning there will be no runoff. (J.R. TIDWELL/ADVERTISER)

Van Smith will be the Republican nominee during the general election for the House District 42 position being filled by special election after the passing of Jimmy Martin.

Smith received over 56% of the vote during the Republican primary on Aug. 20, meaning that no runoff will be held.

This means the general election will be on Nov. 5, when Smith will face lone Democratic candidate Kenneth Allison Sr. and a potential third-party candidate, Libertarian Doug Ward, either on the ballot or by write-in campaign.

“Thank you to the voters of District 42 for placing their faith in me,” Smith posted on social media after winning the primary. “I’m honored to be the Republican nominee and will work hard to win the General Election on November 5th.”

This does not include any provisional ballots, but Probate Judge Jason Calhoun said there are too few of those to affect the outcome of the election.

House District 42 is made up of a large swath of Chilton County and part of Autauga County.

Only residents of District 42 were allowed to vote in the election, meaning only district residents had a say in the outcome.

Those living in other areas of Chilton County who were not allowed to vote Aug. 20 live in either District 49 or 81 and have a different representative, be it April Weaver or Ed Oliver.

House District 42 was also on the 2018 ballot, but Martin’s passing led to the special election, which Gov. Kay Ivey called for.

“I offer my congratulations to Van Smith on his apparent victory in the Republican Special Primary Election for Alabama State House District 42,” said Alabama Republican Party Chairman Terry Lathan. “While this district is considered a solid Republican area, we will not take anything for granted and plan to work hard to ensure we hold this seat.”