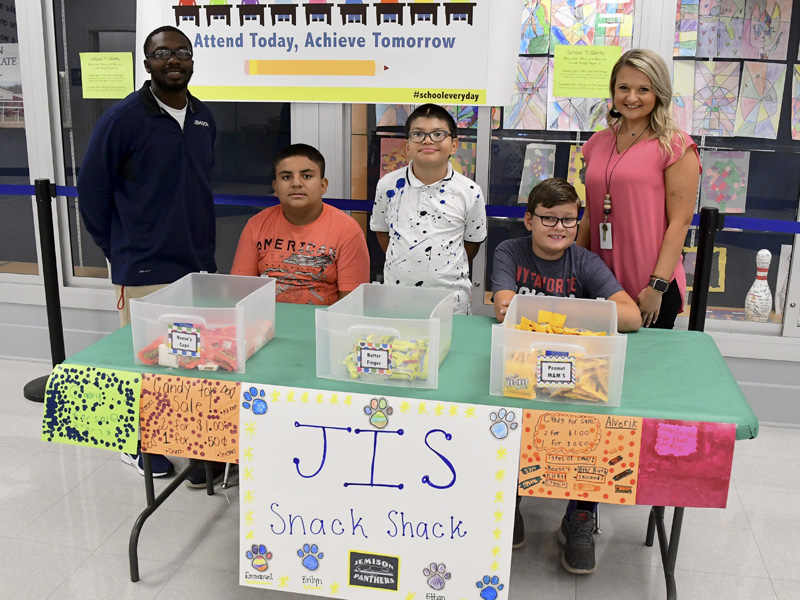 The JIS snack shack is now being run by students after members of the school staff manned it in previous years. (Photo by Anthony Richards)

Jemison Intermediate School’s snack shack is fully run by students and has been since the second day of the school year.

The new initiative was created by Taylor Henderson and includes four students from fourth to sixth grade who are part of her self-contained class.

According to Taylor, the snack shack has been around but was previously manned by members of the school’s staff.

“I really wanted my kids to get out and about and for everybody to realize that they can do a lot more,” Henderson said. “I wanted to give the students an opportunity to gain some real life skills.”

The group is know as “Henderson’s Heroes” and is looking to build upon that snack shack and do even more around the school as the year goes along.

“Mr. [D.J.] Nix has given me a lot of freedom to do what I feel like is best for the kids,” Henderson said.

Selling the snacks is only part of process. The students are heavily involved in the entire project, which includes stocking the items and breaking down the boxes.

Recently, the students even began calling and ordering the items to be delivered.

“They truly get to interact with even more people,” Henderson said. “We have this old-fashioned view that a classroom has to take place within these four walls, but learning can happen anywhere. It’s about being creative and trying new things.” 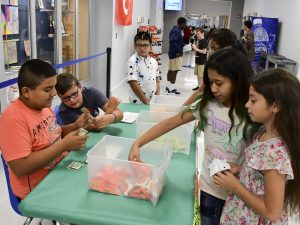 The JIS snack shack is a popular place once the bell rings. (Photo by Anthony Richards)

Each student is assigned a certain job, which is part of a rotation. The jobs include greeting, taking dollars, taking change and sorting the money.

Emmanuel enjoys being a greeter and helping spread the word that candy is being sold. Part of his technique includes a variety of dance moves that he has practiced.

“In the end when everything is done they have to clean everything up to make sure that they are ready for the next day,” Henderson said.

Ethan likes the opportunity he gets to talk and interact with many different people.

According to Henderson, there are certain grants being considered that would help the group begin baking certain items.

“We’re trying to work towards a field trip where they don’t just order it but also get to go and pick it up,” Henderson said. “That’s our next step.”

One of the major goals of the program is to help the students be more prepared for the workforce training they will encounter in middle school.

Alverick said he enjoys everything about working the snack shack and found it difficult to pick just one aspect of the job that he preferred over others.

“Every week we try to just add one more thing to it,” Henderson said. “Hopefully it will just keep getting bigger and bigger.”

The snack shack could even possibly make an appearance at school dances or football games.

“They’re really proud of what they accomplish and it gives them something to look forward to,” Henderson said.

By the end of the first year she hopes to have a coffee shack to go along with the snack shack.

The snacks are sold each day school is in session beginning at 1:20 p.m. Snacks sold include candy and chips.