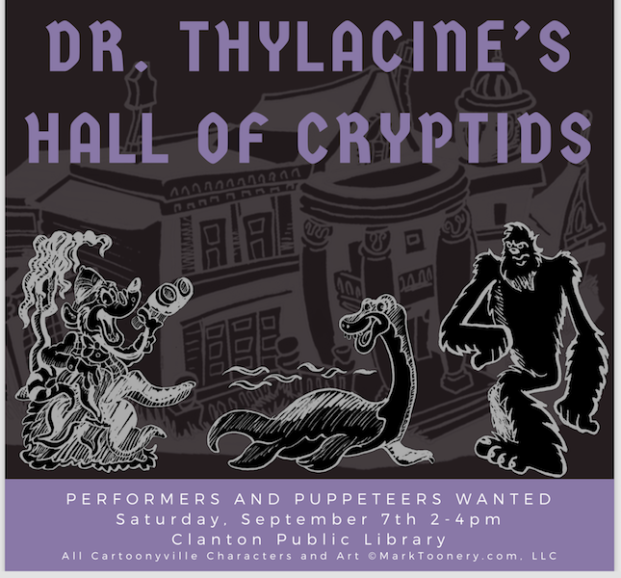 "Dr. Thylacine's Hall of Cryptids" by Mark S. Smith will be performed by Central Alabama Performing Arts Guild on Oct. 26. Auditions will be held on Sept. 7. (Contributed)

The Central Alabama Performing Arts Guild has added a Halloween production to its performance list for this year.

Director Craig Isley of CAPAG said the show will be a puppet play, featuring a combination of actors and puppeteers.

“We will have live actors interacting with puppet characters, so it’s not a typical puppet show,” Isley said.

The Guild will hold auditions for all of these parts on Sept. 7 from 2-4 p.m. at the Chilton-Clanton Public Library, 100 First Avenue in Clanton. The show is family friendly, and all ages are encouraged to audition. No experience is required.

“I believe it is the first all original production for Central Alabama Performing Arts Guild,” Isley said.

“Dr. Thylacine’s Hall of Cryptids” was written by Mark S. Smith, a friend of Isley’s who grew up in Chilton County and now lives in Atlanta. Isley said he and Smith would perform an annual Halloween puppet show when they were young for their church’s Halloween carnival.

“We just had so much fun back in the day doing that that we’ve always talked about getting together and trying to do a puppet type event,” Isley said. “My involvement with the Guild has given us the opportunity to do that. It will be the most elaborate and probably best production we have ever done.”

Isley said he was looking forward to working with Smith again, and “seeing people in the community who have maybe never worked with puppets before learning how.”

Those auditioning do not need to bring anything. Puppets will be provided for those wanting to audition to be a puppeteer. However, Isley said those auditioning could bring their own puppets, if they preferred.

The expected 12 rehearsals will include puppet workshops for the puppeteers. Isley said some participants will be able to do acting and puppeteering, while there are other parts that are just one or the other.

During the audition, each person will be given a character list and a script to read for the character they are interested in.

“All of the puppets will be custom made by Mark,” Isley said. “He is a very talented puppet maker and puppeteer. He recently taught a puppet making workshop at the Center for Puppetry Arts in Atlanta.”

Republicans hosting forum ahead of election

By J.R. TIDWELL / Editor Polls open at 7 a.m. on Aug. 20 for the Republican primary portion of the special... read more