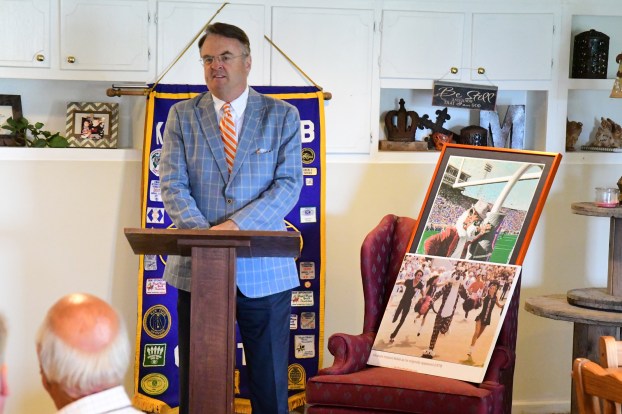 Barry Mask, who played as the original Aubie for Auburn University, spoke to the Clanton Kiwanis Club on Aug. 8. (J.R. TIDWELL/ADVERTISER)

The Clanton Kiwanis Club hosted a special guest speaker during the organization’s meeting on Aug. 8.

Barry Mask, who was the very first person to don the Auburn University “Aubie” mascot outfit, came and spoke to the members about his time in the role.

Afterwards, Mask said one of his fraternity brothers came to his room and found him moping.

“He said ‘why don’t you try out for this mascot thing. Man, you’ve got this.’ I was having a pity party.” Mask said. “I’ll never forget. I was hanging up some clothes in my room, and he took me, spun me around and pinned me against the wall. He said ‘you need to knock off this pity party. You’re gonna try out for this, or I’ll never speak to you again.’”

Mask said he mentors groups of both high school and college wrestlers, and while speaking he will ask those present if they have a friend like that, and if they are that friend to someone.

Mask tried out, and he won the position. He said that illustrator Phil Neel had created Aubie for home program covers years earlier, but now the university wanted to make the mascot come to life.

Mask said he worked with the cheerleaders and came up with the idea to have a skit before each game, a tradition that continues to this day.

“I wanted to brand Aubie, and he would do crazy things,” Mask said.

Things like mocking the Tennessee Walking Horse as it trotted around Neyland Stadium, and dressing like legendary Alabama football coach Bear Bryant to recreate an iconic photo of the man leaning against a field goal post.

Mask said Bryant came upon Aubie as the mascot, dressed like the coach, mimicked the photo.

“I know I must have froze, and he sensed it,” Mask said. “He pointed to that hat and said ‘I like that hat Aubie.’ We shook hands, and he left.”

Mask’s experiences at Georgia Tech and at home against Florida that year were not quite so cordial.

Mask learned the Monday before Auburn was set to face Georgia Tech in a road game that the Tech athletic club had placed a $400 bounty on Aubie’s tail.

“We knew before we went over there, there would be some shenanigans,” Mask said.

A group of freshmen who came out to welcome the Tech players out onto the field turned their attention towards Aubie.

“About 30 yard line, their security comes running up and says ‘y’all need to get your tiger back, they’re coming for him,’” Mask said.

“Here comes a group of freshmen. I had been practicing that week running in the suit. I grabbed that tail, and I took off down the corner of the end zone where the Auburn band and fans were. I got to the chain link fence and looked back, and there were fights everywhere.

“Their cheerleading guys were fighting ours, their state trooper was fighting our state trooper. It was absolute pandemonium. People were tackling people. There was still plenty of these Tech kids coming after me. The band director said ‘Aubie, jump over the fence.’ So I got over the fence and got about five (rows) deep into the band. I was thinking, ‘this is over with.’ No. It was not over with.

“This group of Tech students came climbing over the fence into the band still trying to get to Aubie. That’s when the band director said ‘hit them with your instruments!’ I saw a little petite flutist just flailing hitting some guy.”

Mask said kickoff was delayed for 25 minutes due to the fracas, the incident made both the cover of the Atlanta Constitution newspaper the next morning as well as CNN that night.

However, Mask said Auburn won that game big, and “the players carried Aubie off on their shoulders.”

The next week Florida traveled north to play at Auburn.

Mask said he had met the person playing the Florida mascot, Albert the Gator, at mascot camp prior to the season.

He said the two set up some pre-game shenanigans, shook hands, “Aubie turns around to walk off, and he tackled me in the back from behind,” Mask said. “And it hurt. And when you’re 19, and you’re from Tallapoosa Count, that red (neck) comes out. I was so mad, I got up and grabbed the gator snout. I twirled that guy around until the head came off, and I threw it up in the stands to the students.”

“I ruined it for everybody,” Mask said. “That’s why they have the Aubie Disciplinary Committee now.”

Aubie remains the mascot at Auburn University to this day and has been one of the most highly decorated characters across the country.

Mask, who is from Alex City originally, went on to become a two-term member of the Alabama state legislature and now works for River Bank & Trust in Auburn.