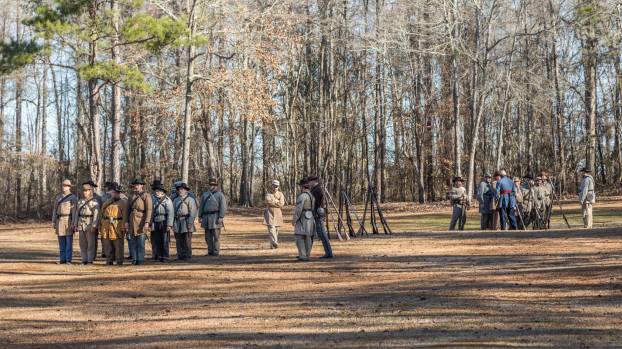 Living historians will be putting on a program centered around arms and military maneuvers at Confederate Memorial Park in Marbury Aug. 17. (CONTRIBUTED)

The Alabama Historical Commission and Confederate Memorial Park in Marbury will host a “Drill, Drill, Drill!” program as part of the 2019 Living History series.

According to a release on the program, the event will focus on the manual of arms and military maneuvers of the Civil War.

Alabamians had to learn the art of war in the nineteenth century and to adapt new tactics to match the introduction of new weapons and equipment into the conflict. Demonstrations will include how the soldiers handled their weapons, the rank and file system, and the basic maneuvers performed by a small company of men.

According to Confederate Memorial Park Site Director Calvin Chappelle, “Many historians consider the American Civil War to be the first ‘modern war’ in part due to the advanced technology being used to manufacture weapons and ammunition.” The rifling of gun barrels, use of the Minié ball, and development of the repeating rifle are just a few of the advances that made the war technologically equally advanced and deadly.

“Drill was the manner in which soldiers were taught and remained prepared for battle. William Joseph Hardee, a veteran of the Seminole Wars and the Mexican American War, wrote what would become the most widely-used infantry tactic manuals of the Civil War – Rifle and Light Infantry Tactics (1853-1855), or as it was more commonly known, Hardee’s Tactics. Written originally for the US Army in 1855, it was adopted by the Confederate States Army when Hardee resigned to enter the Confederate service. This manual is still being used by living historians today to accurately portray Civil War military maneuvers.”

According to the release, throughout the day living historians will occupy the authentic reproduction barracks on site and offer demonstrations to the public. Demonstrations will begin at 10 a.m., noon and 2 p.m.

There is no cost to attend the event, which is open to the public, but normal museum admission rates apply.

The next Living History event will be “Cooking with Commissary” on Oct. 19.

Confederate Memorial Park is located at 437 County Road 63 in Marbury.