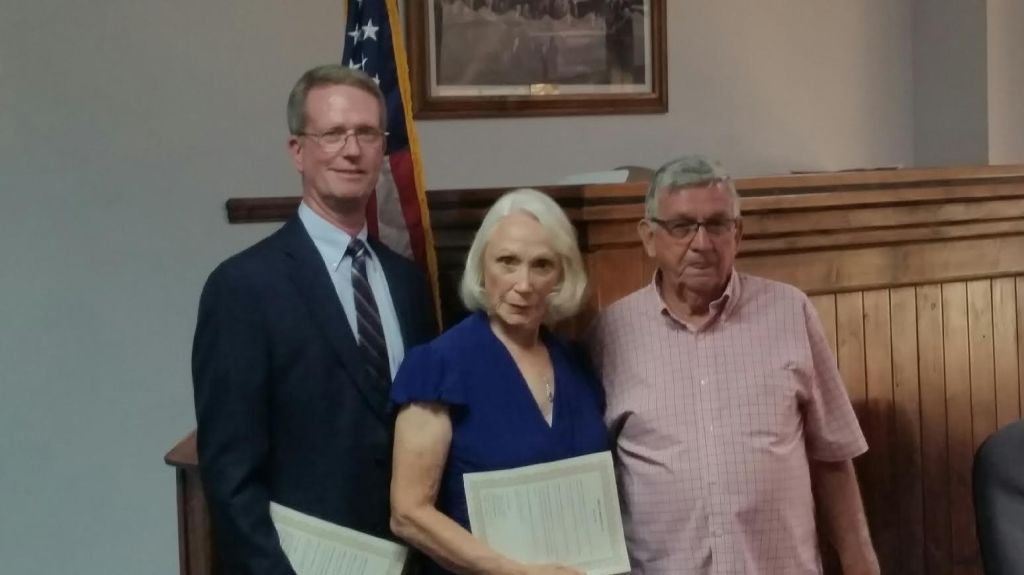 The Town of Maplesville held a reception for retiring doctors Lucy Collins and Bill Martin Jr. on Aug. 13. (CONTRIBUTED)

The Town of Maplesville held a reception for retiring doctors Lucille Collins and William (Bill) Martin Jr. in the town’s library ahead of the council meeting on Aug. 13.

During the meeting, Mayor W.C. Hayes read aloud a resolution, one for Collins and one for Martin, thanking them on behalf of the town for their years of service.

Collins and Martin Jr. both thanked the Council for the honor and spoke of their time practicing in Maplesville.

In regular business, the Council starting with a look at the town’s financial report and a vote to pay the bills.

Resident Carol Miley came before the Council to request a mirror be placed on a pole near her residence on Highway 139. She said that traffic coming down a nearby hill makes leaving her driveway unsafe and requested the mirror so that people exiting the premises can tell whether or not any traffic is coming.

Hayes said since that road is state owned he would have to ask about the mirror, but he and other Council members suggested the town may be able to build a bracket themselves.

Ed Hale also took the floor in order to bring the state of the hiking path at the local park to the Council’s attention.

Hale said the path needs to be resealed, or it might end up needing to be repaved later.

Hayes and other Council members agreed to look into the issue.

Maplesville Fire Chief Melvin Morrow requested the Council’s permission to use $5,600 in department funds for vehicle lights and up to $1,000 to put on an annual fire safety class for children at Maplesville High School.

The Council unanimously agreed to both measures. The funds in question belong to the fire department, but the group must have permission from the Council before using the money.

In other business, the Council voted to continue the town’s contract with the Middle Alabama Area Agency on Aging (M4A) for the senior center.

The Council also voted to increase the town’s annual contribution to Butterfly Bridge Children’s Advocacy Center from $1,000 to $1,500 per a request from the organization.