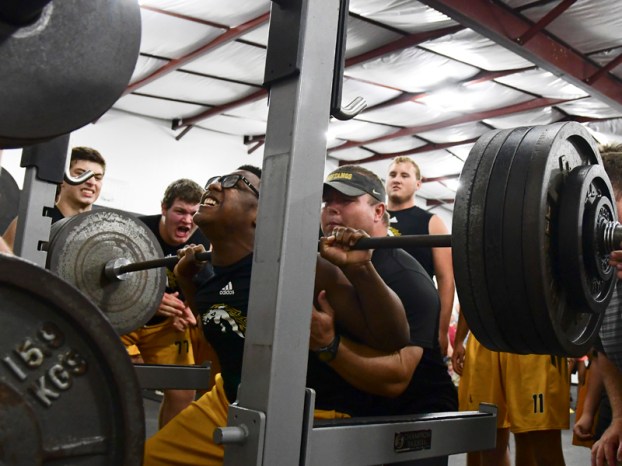 Summer conditioning is a key part to a football team’s success during the regular season.

However, with the regular season still a couple of weeks away, the Isabella Mustangs were able to showcase some of the gains they made in the weight room during a lift-a-thon on Aug. 2.

“I love these events, because it’s an opportunity to get out here and not only prove to myself but to the other players that I’m in and I’m ready to go for it,” Isabella lineman Logan Littleton said.

As has been the case for the past four years, the event fell on the same night as student orientation, which allowed for parents to view the event.

Parents and friends watching just feet away brings about a unique feel that no other weightlifting session has throughout the year. The increased adrenaline can act as added strength. 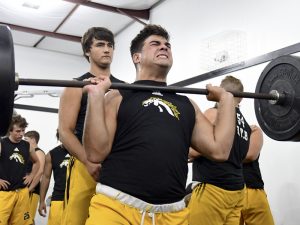 “Performing in front of an audience gives you an extra boost and makes you want to lift even more,” Littleton said. “It gets you shaking.”

The goal heading into the event is for each player to improve their personal best weight by 10 pounds. It was achieved by each player, with many surpassing it.

“Both our JV and varsity went up, which is what you want to see at the end of the summer,” Leonard said. “They feel good about themselves and we’re making progress.”

Bench press, squat and deadlift were the three forms of weightlifting that each player took part in.

“We’ve seen players get stronger every year,” Littleton said. “Bench press was the biggest thing for me. I definitely stepped up what I could in that.”

This year’s lift-a-thon was held inside the school’s new all-purpose facility.

“It definitely helps to get a bigger facility that’s more open,” Leonard said. “The kids are excited about it, and we’re happy to have it.”

The rebirth of an old tradition turned out to be an excellent source of fundraising for the Maplesville football program.... read more