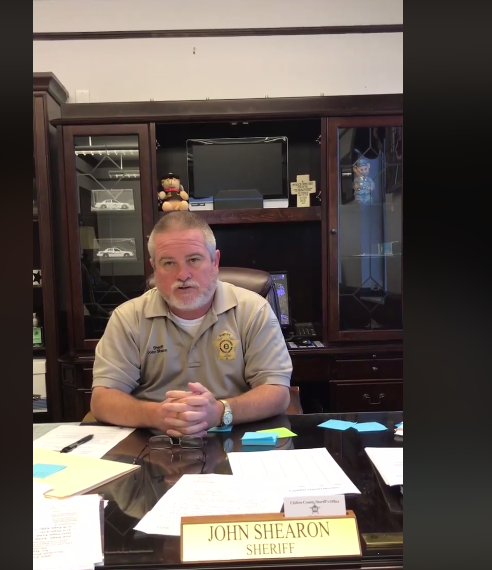 This still of Sheriff John Shearon was taken from a video uploaded to social media by the Chilton County Sheriff’s Office addressing funding issues faced by the department. (CCSO)

The Chilton County Sheriff’s Office recently released a video and slideshow onto its Facebook page highlighting the department’s need for more funding.

Sheriff John Shearon has gone before the Chilton County Commission on previous occasions and highlighted the need for more CCSO funds.

However, he said that the local group is not really to blame for the department’s current predicament.

“People look at it like it’s a problem with the commission,” he said. “It’s really a problem with the state. They keep kicking people out of prison or they are not going at all, and we have to deal with them at the county level. We have always had a good working relationship with the Commission, we just don’t have enough money to go around.”

While Shearon did not put a specific number on the figure he would be asking the Commission for, he did say it was “substantial” but would put the budget in line with other similar departments in the area and put CCSO “where it needs to be” right now.

According to Shearon, around 5,000 people cycle through the Chilton County Jail throughout the year. This number includes repeat offenders being released and incarcerated again.

Legislation in recent years has led to lighter sentences and shorter stays in correctional facilities.

“I call it the catch and release program,” Shearon said. “We are chasing the same people over and over. If they go to prison, they are (often) let out early and put back on the streets. It works for the state, but it’s killing the counties.”

Overpopulation and unconstitutional conditions at state correctional facilities have been big issues for Alabama as of late. This includes lawsuits and pledges from Gov. Kay Ivey and others to address the situation.

Sen. Cam Ward has worked on multiple pieces of legislation when it comes to issues with state correctional facilities, including carrying a bill that sought new oversight over the pardon and parole system.

“Heads need to roll at the Board of Pardons and Paroles,” Ward said during a Senate debate after recounting a story of a disabled convenience store clerk who was gunned down by a parolee. Information on the passing of this bill sits atop the Latest News section of Ward’s website.

“We have to deal with (the inmates),” Shearon said. “If they are sick, we have got to pay for their medical treatment.”

“Although we do everything to reduce these costs, we estimate that medical expenses will be over budget $110,000 by the close of this fiscal year,” CCSO said in the presentation.

According to Shearon, an average of 135 inmates could be found in the jail on any given day in 2015.

“The jail was built to house 169 people,” Shearon said.

According to the slideshow, CCSO is understaffed and has seen a turnover of 27 employees over the last few years.

“This is largely due to noncompetitive salary, cost of family coverage insurance and extreme workload,” reads the presentation. “The Sheriff’s Office is underfunded and always has been. We have now reached a point where the citizens’ and deputies’ safety and security are at risk.”

“That leaves us no time to be proactive,” Shearon said. “ It gets so overwhelming, sometimes we have to prioritize calls and some things have to wait.”

Shearon said the turnover rate hurts the department in more ways than one.

“It affects us greatly,” he said. “We have to pay to get new deputies certified. We have money invested in them. Then if they leave, we have to turn around and hire someone else. It’s a cycle, and it’s getting harder and harder to get people into law enforcement because of the pay and the workload. It’s not just us. Departments are having the same problems around the state.”

CCSO averages four deputies on the clock, and the department covers all 700 square miles of Chilton County, whether it is as the primary law enforcement agency for an area or assisting other departments.

Shearon said increasing the budget would allow CCSO to hire additional deputies, which would help with both the response times and officer safety.