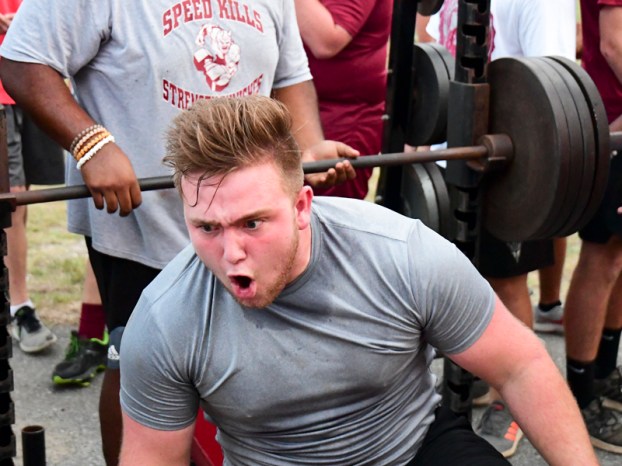 Maplesville senior Noah Walls was pumped up during the Devil Strong Lift-a-thon on Aug. 1. (Photo by Anthony Richards)

The rebirth of an old tradition turned out to be an excellent source of fundraising for the Maplesville football program.

The Devil Strong Lift-a-thon was held at the school on Aug. 1 and brought in just over $5,500 in straight donations before a pound was ever lifted.

“We should clear about $6,000 easily,” Maplesville head coach Brad Abbott said. “It just shows how much the community supports this school. It was a group effort to raise that much.”

The lift-a-thon took place on the same night as Maplesville’s orientation, which worked out because several people came straight from the meeting to the event.

“It was the first time that they had done it in a long time,” Abbott said. “Anytime something’s new, people get excited about it and want to see what it’s all about. They [fans] got a good show tonight, and next year it should be even bigger.”

Seventh graders to seniors took part in the fundraiser.

The event was held outside, which gave parents and friends room to walk around the sectioned-off area and find the best glimpse of who they wanted to see. 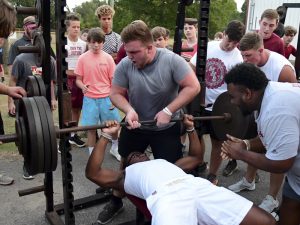 The Red Devils football program raised just over $5,500 before a pound had been lifted. (Photo by Anthony Richards)

“It made it very personal,” Abbott said.

It was a big deal for many of the parents, who usually drop their kids off in the morning for workouts but don’t get the chance to see their child go through the routines.

According to Abbott, a lot of dads were probably pretty surprised to see how much their son can lift.

Some of the night’s highlights included Cole Gray and Trevon Blackmon, a pair of incoming sophomores benching more than 350 pounds, while senior running back Ryan Morrow benched 455 pounds.

The event was tailor-made for the linemen to showcase their strength, and they did just that with seniors Noah Walls and Dorian Heard raising the pounds and attempting to match each other’s production.

Heard ended his night on the bench press with a successful attempt at 500 pounds.

Another one of the highlights included sophomore Joseph Johnson bench pressing 225 pounds, which was well over his body weight.

“Everything lined up for us,” Abbott said. “It was a good night in the weight and the financial totals.”

Isabella volleyball continued the tradition of hosting its annual camp in the period after summer workouts and prior to the... read more