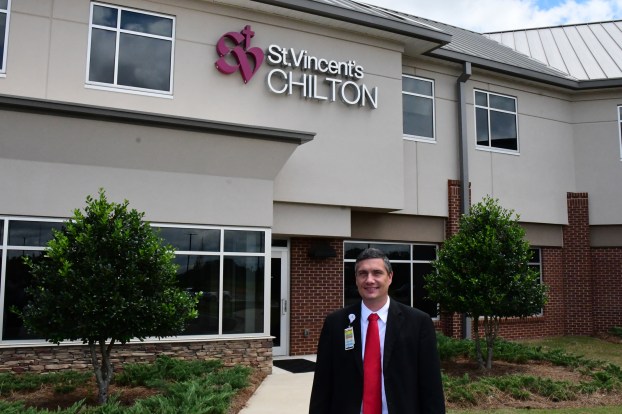 Whenever St. Vincent’s Chilton in Clanton recently found itself looking for a new administrator, the search to fill the role did not have to go far.

In fact, the man who would be offered the position grew up playing baseball in Thorsby and had already worked his way into a management position at the hospital.

St. Vincent’s Chilton recently named Shanon Hamilton as it’s new administrator. He moved up from the position of director of clinical services that he already occupied there.

Former administrator Suzannah Campbell moved up to be president of three network hospitals around Birmingham.

“Having already been in administration, I already had a large piece of the pie,” Hamilton said. “I had all the non-nursing departments here. Previously, I reported all those areas to Suzannah. I still maintain all those areas now, and Pam Culotta maintains the nursing areas as the director of nursing. The only real difference is those areas report up to me instead of Suzannah now. I am much more engaged with the nursing departments now than I was.”

While the search to fill the administrator position might not have had to go far, Hamilton himself has worked his way up across multiple hospitals.

“I went to college in Tuscaloosa at Shelton State initially,” he said. “I played baseball for them. Then I transferred to UAB in nuclear medicine. I graduated from UAB and then started my career. I wanted something that was challenging where I could use my love for science and be able to help people. Those were the things I felt were important. That’s how I stumbled across nuclear medicine. It was a good way to utilize the skills I already had with science to help people.”

Hamilton graduated from the UAB nuclear medicine program, which deals with diagnostic imaging, at the top of his class. He then took a position at Shelby Baptist Medical Center before accepting a full-time position at Brookwood.

“I worked there (Brookwood) eight years,” he said. “Eventually, I worked myself into a management position. After Brookwood, I wanted to come back home, so I came to the old hospital in Clanton. I interviewed for a nuclear medicine tech position. I took a demotion just to get closer to home.”

Hamilton worked at the old hospital in Clanton for six months before becoming the director of radiology there. He held that role for six years before moving up to interim COO.

“Then the hospital got leased by Carraway,” he said. “When they came in they brought their own leadership in, and they allowed me to step back down into a director of ancillary services position. I was in that position for a year and a half there. When the hospital closed in October of 2012, I interviewed for the same position at St. Vincent’s One Nineteen (in Birmingham). The Lord blessed me with a great opportunity to work there and get to be a part of a totally different culture, one I had really not experienced in health care to that point. It allowed me to form some great relationships and work with some really amazing people.”

Hamilton was over such departments as diagnostic imaging, the laboratory, physical therapy, facility operations, safety and security and the professional office space.

While at St. Vincent’s One Nineteen Hamilton, his coworkers and superiors worked to improve and add services to the facility.

It was always understood that, if the opportunity arose, Hamilton wanted to return home, which he was supported in.

Hamilton said St. Vincent’s Chilton opening in Clanton was pretty much a “done deal” in 2015.

“Suzannah was hired as the administrator, then six months later there was a position posted for director of clinical services role,” he said. “I interviewed for and accepted the position. That was in April of 2016. We did a lot of work from then until October to be able to get the hospital operational.

“Fast forward two and a half years later, and Suzannah gets a great opportunity to go to St. Vincent’s East as the president of that hospital, Blount and St. Clair. That opened up the administrator role here. I had the opportunity to interview for the position and was offered the role.”

Hamilton said his career has been “blessed.”

“A lot of good mentors have gotten me to where I am today,” he said. “It’s certainly not anything I’ve done. The Lord has blessed my career, and I have been surrounded by some fantastic people.”

He said having someone local as administrator of St. Vincent’s Chilton “doesn’t hurt,” but anyone in that position would work hard to keep up the hospital’s quality.

“There was a lot of interest from various individuals I have spoken with, they wanted someone local in the position,” he said. “I don’t necessarily think it’s a requirement by any standard, but it is nice to be able to walk through the waiting rooms and see people I know every day. When I walk through the lobby every day, I will see someone I know. It really is a blessing to be able to have an impact on the people that I know, and the rest of the members of the community I don’t know yet.

“Whether I’m in this seat or someone else is in this office, we still focus on the core tenets of patient satisfaction, associate satisfaction, physician satisfaction and quality. If you get all of those things right, it doesn’t matter if you are from Chilton County or not, you’re going to be doing well if you can achieve excellence in those areas.”