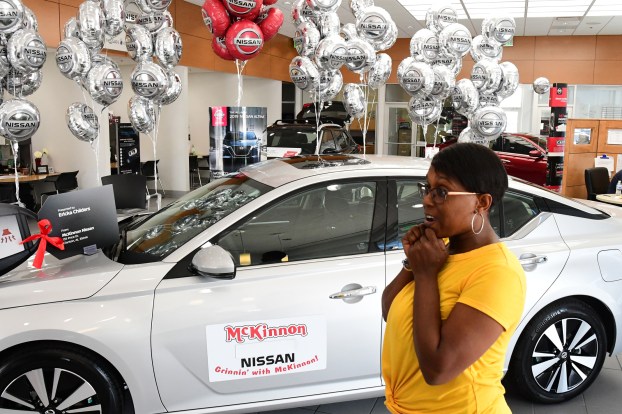 Ericka Childers of Clanton reacts as she hears about her new car. (J.R. TIDWELL/ADVERTISER)

She said she had been told to be there at the time to receive her new car.

Childers entered a sweepstakes found on a Nissan mailer in March and was later told she was the lucky winner of a brand new 2019 Nissan Altima.

“We get these circulars in the mail,” she said. “Most people throw them out. I decided to fill it out, because what did I have to lose? Then a few months later a lady with the advertisement called to tell me I had won. I was like ‘Are. You. Serious?’”

Wadkins acted cool and played it off, telling Childers he would show her the car she had won shortly.

What Childers did not know was that she was already standing directly beside her new car. It even had a tag with her name on it sitting atop the hood.

However, she had not seen that yet.

“I’m so glad that she didn’t notice it,” Wadkins said. “I wanted to surprise her. We wanted it to be special. We have been blowing up balloons all morning for this. We cleaned the showroom and moved the other cars around to put this one here.”

Childers walked back outside to tell the coworker who brought her to the dealership that she could return to work. She said she was tired of waiting on her kids to come get her and take her there.

Wadkins stopped Childers as she walked back through the front door. She was sure to see the sign at any time, so Wadkins went ahead and took the opportunity to complete the surprise.

He pointed at the car both were standing beside and said “that one’s yours.”

Childers doubled over in delight upon the realization that she was standing right beside her brand new vehicle.

“I feel like it’s not real,” she said. “I have never won anything. It was unbelievable. I thought I was dreaming.”

Childers grinned from ear to ear as Wadkins handed her the keys to the Altima and told her about all of the vehicle’s different features.

Childers’s 17-year-old daughter turned up during the tour of the vehicle. She told her mother that she was looking forward to driving the new car.

Unfazed, Childers told her daughter she could instead drive her current vehicle, a 2013 Ford Fiesta.

“I just happened to be selected,” Childers said of her big win. “I would advise anyone to take heed (of the circulars) and not throw them away, because things do happen. I’m standing here with a brand new car. That’s mine.”

Wadkins said he was thrilled to be able to give Childers the new car.

“Nissan USA put on the sweepstakes,” he said. “The website said there was one winner. We were told two days ago. It feels awesome, especially to be able to give this to someone local in the community.”

Childers said she planned on driving her new Altima off the McKinnon lot once the paperwork was finished.

As far as after that goes …

“I’ll probably take it home and just stare at it,” she quipped.

By J.R. TIDWELL / Editor The saga surrounding the criminal case in the 2018 death of a Jemison woman is... read more