Johnston integral part of space program from its infancy 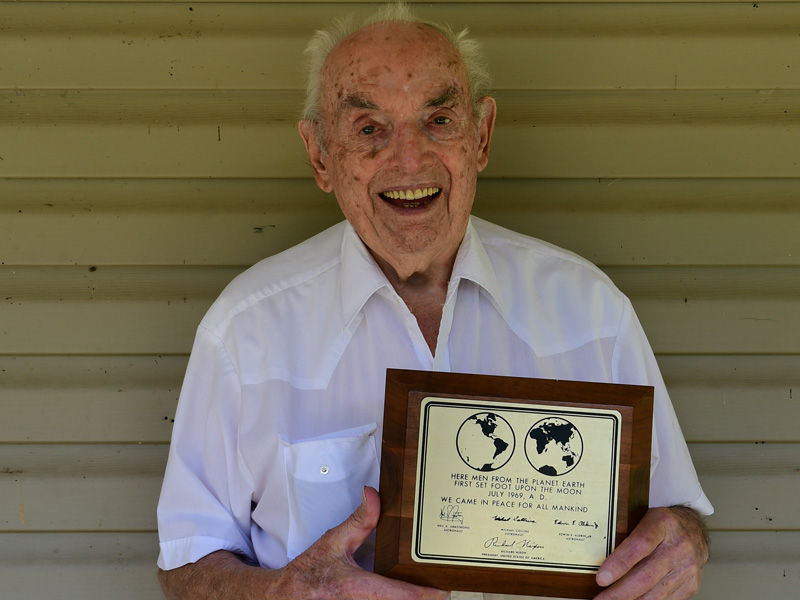 Hestle “Hard Rock” Johnston holds his plaque from NASA, an official replica of the one on the moon. (Photo by Joyanna Love)

For Hestle “Hard Rock” Johnston, memories of the Apollo 11 mission, which was 50 years ago this month, are firsthand and represent seeing the culmination of years of work that he and countless others had put in to getting to this point.

“I started work for the government in 1944 as quick as I was 18 years old,” Johnston said. “I went to work for the space business in 1955, the Army Ballistics Missile Agency back then, before that I was working for Army ordinance building the M69 and M74 bomb clusters.”

Johnston said “nobody even imagined” how monumental the space program would turn out to be in those very early years.

At the Army Ballistics Missile Agency, he continued to move up to higher positions working in various aspects of the chemical work for propulsion and designs for simulators of the rockets. When Apollo started, he was involved in the astronaut receiving team.

He earned the name “Hard Rock” from his no-nonsense approach and keeping mistakes from making it past his desk.

His first job with ABMA was in researching for the design of specialized trailers to transport fuel tanks. He moved up to foreman in Huntsville with 30 men under him.

Johnston worked in cryogenics, using liquefied gases for propulsion. These liquid gases (nitrogen, hydrogen and oxygen) would boil back into a gas at temperatures hundreds of degrees below zero.

“When I retired, I was working for the Department of Defense out of Washington monitoring NASA contractors,” Johnston said. “But, I was a pioneer of it.”

“The government moved me everywhere, where they were having trouble,” Johnston said of working for the Department of Defense with the space program.

Johnston helped to design an oxygen pumping system that was used on one of the barges used to transport the Saturn V simulator rocket. Johnston said a tug was used to get the barge to Cape Canaveral. Because the rivers were flooded at the time, the team had to partially sink the barge before beginning the journey. The simulator was used to certify the launch pad.

“NASA had three of these barges … It’s the only way they could move a lot of that stuff because it was so big,” Johnston said.

On one trip, a ship hit the barge.

“It took part of the hull,” Johnston said.

The barge was dry docked for three days for repairs.

“We took it to the (launch) pad, certified the pad, then took it back to Huntsville,” Johnston said. 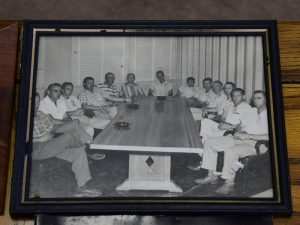 Hestle Johnston with his team at the Army Ballistics Missile Agency. (Photo by Joyanna Love)

In 1965, Johnston was a unit manager of activation at the Mississippi Test Facility. His job was to make sure that the components for the fuel, cryogenics and the test stands were completed correctly by the contractors. He said this temporary duty assignment grew to two and a half years.

“I had over 200 pieces of equipment checked out to me when I was in the Mississippi Test Facility,” Johnston said.

The majority of this equipment was portable.

Johnston was called on to help when the Saturn V launch needed 8,000 gallons of liquid nitrogen or the mission would have to be canceled. Army trucks were used to transport the materials with a police escort through each town they came to and got from Huntsville to Cape Canaveral in 20 hours.

During Apollo, Johnston was on the suggestion committee for the command module. Johnson said he had approved a design that did not open inward, but the inward design had already gone into production. After three astronauts died when they could not pull the door in against the pressure of the pure oxygen, several changes were made to the command module to make it safer, including a door that opened outward.

Later, Johnston was a part of the quarantine team. Johnston was one of a few people who interacted with the astronauts after they returned to earth and were in quarantine.

The first quarantine chamber the astronauts were in was a mobile airstream trailer to be transported.

“This was set on a flatbed aircraft carrier, and then the boys were taken out of the capsule and put in this,” Johnston said. “They stayed in this thing until I took them out of it at the lunar receiving laboratory (in Houston).”

One of the trailers used is now on display in Huntsville with Johnson’s picture.

Johnston still has his security badges that allowed him to get into the facility. He would collect all the samples from the missions and get them to the right departments.

Each of the astronauts were in quarantine for 30 days.

Johnston had good things to say about John Glenn, the first American to orbit the earth.

“He was a super person,” Johnston said.

Johnston also remembered Neil Armstrong, the first man to walk on the moon, for having a calm temperament.

“He was such a super person to know,” Johnston said. 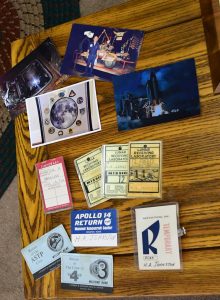 Badges from some of the projects Johnston was a part of and photographs are some of the mementos he has kept from his long career. (Photo by Joyanna Love)

Among Johnston’s many artifacts from working in the space program is an exact replica of the plaque placed on the moon to commemorate the first landing. The plaque was mailed to him by NASA. He said it was only one of three that were created, as far as he knew.

Accompanying documentation said it was in recognition of all the improvements he had recommended.

“I had invented a bunch of stuff for NASA,” Johnston said.

One major project being combining four cryogenics systems into one.

“NASA accepted that, and I got a chunk of money out of it,” Johnston said.

In 1968, Johnston had attended six months of quality control training with the Department of Defense.

“That’s when I got my super-secret clearance,” Johnston said.

Later, this clearance was influential in Johnston being chosen to apply for clearance with the Air Force and provide quality oversight on another project in Tampa.

“Our basic function was to take the engines off the shuttle every time they fired it,” Johnston said. “They would send us the three engines, we would fire all three of those engines at 110 percent duration at the same time.”

He was sent to Florida to “monitor the manufacturing of that computer” which controlled the engine. Each of the three engines had its own computer.

“There were seven systems in that computer … it was quite a gadget,” Johnston said.

In the development of the fuel tanks for the space shuttle, Johnston worked on the alignment and welding facility in New Orleans.

Now, at the age of 92, Johnston is retired and lives in Chilton County.