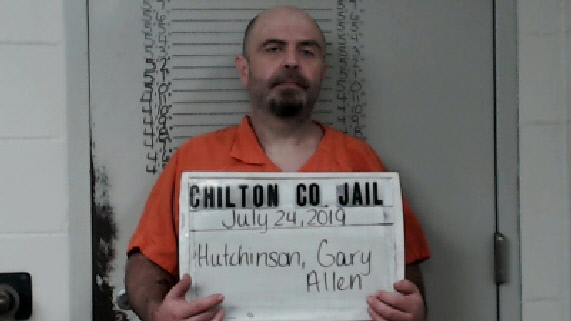 Gary Allen Hutchinson, 42, was arrested July 24 after a manhunt brought on by an alleged shooting incident where no one was injured. (CCSO)

An alleged morning shooting led to a multi-agency manhunt near the Bibb County-Chilton County line in Maplesville on Highway 82 July 24.

According to Chilton County Sheriff John Shearon, Gary Allen Hutchinson, 42, was involved in a domestic disturbance involving his wife.

According to Shearon, the wife, her sister and the sister’s boyfriend were in a residence with Hutchinson. The three allege that Hutchinson had beaten his wife, pulled a gun on them and fired two rounds at the wife’s sister as the three ran from the residence.

“They made it out,” Shearon said.

No injuries were reported.

Once the trio had left the residence, authorities were notified. The Chilton County Sheriff’s Office tactical team responded to the residence and attempted to make contact with Hutchinson.

“We didn’t receive a response, so we had to force entry,” Shearon said. “He had apparently run out and got in the woods near the (residence), so we put the dog(s) on the ground.”

Shearon said the hunt for Hutchinson lasted somewhere around an hour or two, during which time authorities were able to locate both the suspect and the gun. Shearon said he believes Hutchinson had the gun when he left the residence but dropped it outside later.

Once Hutchinson was located, there was no further incident.

Hutchinson was booked into the Chilton County Jail at 12:15 p.m. on charges of harassment and attempting to elude.

Shearon said other charges could be added.

“We would like to thank Clanton Police Department for their help with tracking with the dog,” Shearon said.