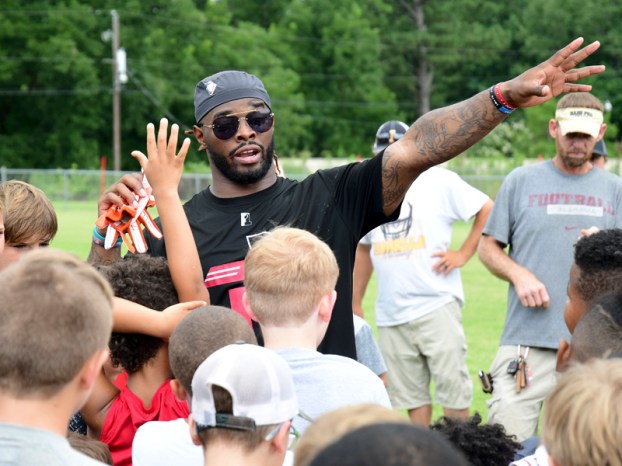 It is not often that the opportunity exists to be taught the game of football by a former NFL football player.

However, that was exactly the case for children both young and old during a football camp led by former Crimson Tide running back Trent Richardson on July 20.

Richardson shared some of the secrets and knowledge that helped make him a Heisman Trophy finalist and top-five NFL draft pick.

“The biggest thing is that there has been a lot of effort,” Richardson said. “Once you’ve got these kids comfortable, they become more competitive.”

According to Richardson, several of the participants had never played football before, so it was a big deal just to have them out there going through the experience.

“It meant a lot to me, probably even more than it meant to them,” Richardson said. “It’s been fun.”

The camp was split into two sessions with 5-11 year olds taking to Susan Bentley Field in the morning and 12-18 year olds occupying the afternoon.

“When I’m training to get back into football shape, it’s more about a mindset,” Richardson said. “It’s a lot about self-motivation.” 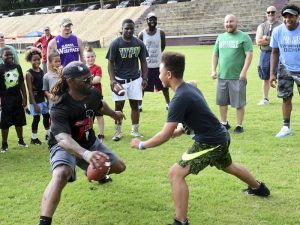 Richardson goes head-to-head against a participant. (Photo by Anthony Richards)

Mental toughness was one of the things discussed during the camp along with the physical side of things.

At times throughout the camp Richardson could not help but think back to when he was first introduced to the game of football.

“I never realized how much patience you’ve got to have as a coach until you come out here,” Richardson chuckled.

Each session had roughly 80 players signup to attend, which put a smile on the face of camp coordinator Joseph Allgood and the others who played a role in making the camp a reality.

“I never got to go to camps like this when I was younger,” Richardson said. “My first camp might have been at [the University of] Alabama, so being able to teach these guys and put them ahead of the game is big.”

According to Allgood, the camp will go a long way in promoting the Thorsby youth football league, and they hope to do something similar next year.

Some of the camp participants even went ahead and signed up for the league’s upcoming season at the event.

Despite just having spent just a brief time in Chilton County and Thorsby, Richardson has seen the passion people have for football.

“I feel like they want it, and they’re hungry,” Richardson said. “It’s up and coming and to have this turnout is pretty amazing.”

Hannah Smith of Thorsby always knew that softball could provide an opportunity to play at the college level. That belief... read more