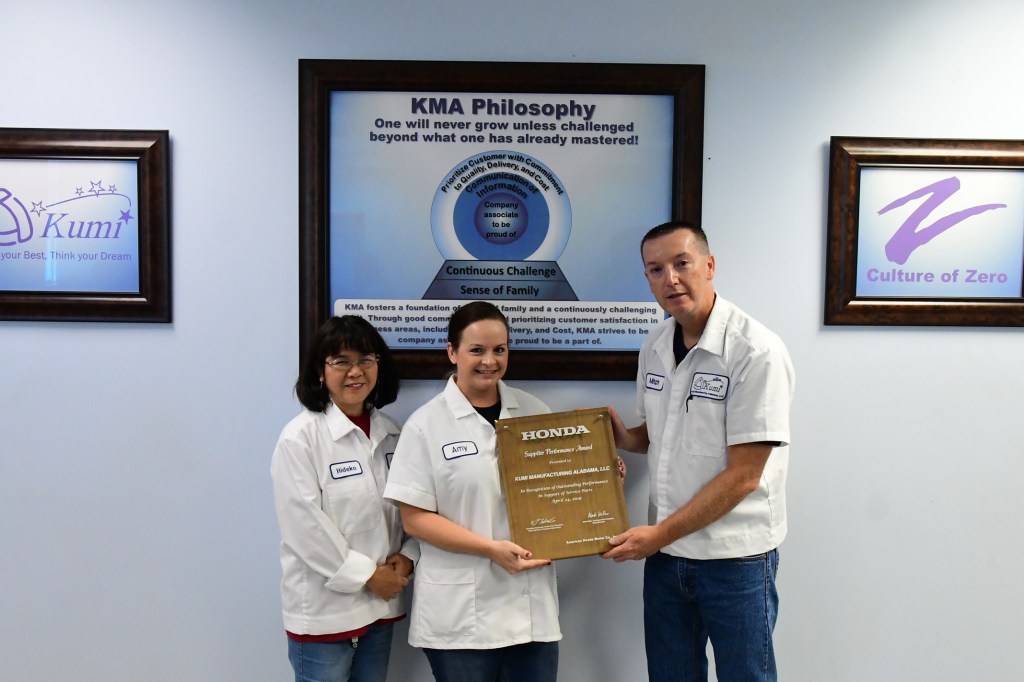 A section of the front office at Kumi Manufacturing Alabama, KMA, in Clanton has been designated as the “Wall of Excellence.” Large blue letters sit atop the newly christened area.

On the wall sits a shiny plaque, one that company president Mitch Robinson hopes will not be the last. 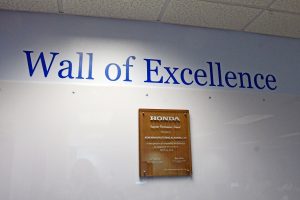 3:
Kumi designated an area of the office as the “Wall of Excellence” in order to house its first award. President Mitch Robinson said staff at Kumi are determined to earn more accolades in the future. (J.R. TIDWELL/ADVERTISER)

KMA was recently honored by American Honda with a Supplier Performance Award for completing 12 consecutive months of on-time delivery when it comes to the company’s service parts.

KMA, established in 2001, makes injection and sheet molded plastic pieces for Honda automobiles. The company has 250 associates that work across three shifts dividing the entire day.

According to assistant sales and purchasing manager Amy Mims, KMA produces anywhere from 10,000-15,000 pieces a month.

“This is our first ever Honda award,” Mims said. “We are very proud if it. We have all worked very hard to get that award. All the departments had a hand in it.”

While service parts may only be a piece of the puzzle when it comes to everything KMA produces, both Robinson and sales and purchasing manager Hideko Mitchell said service parts present a difficult task.

“We have old parts (needed for older Honda models) that are not current mass production parts,” Mitchell said. “We have to maintain all the old parts, like 2001 or before. It is difficult, but we managed it. While we only have four people dedicated to service parts, we have to have everybody’s help to achieve this goal.”

While the accolade may be KMA’s first award, Robinson said the company is already hard at work to earn more.

“Our plan is to continue to get not only this award, but other awards from Honda as well,” he said. “We have reserved a spot for our future awards (the Wall of Excellence.) We are going for a delivery award for mass production next.”

Robinson said earning the on-time delivery award for service parts was a “great accomplishment” given the difficult nature of the task.

“It takes a lot of perseverance and dedication,” he said. “Typically, service parts are more difficult to obtain because some of their tools have been shelved. You are also dealing with materials that may have become obsolete and are difficult to obtain from your supply base. Planning must be done way ahead of time.”

KMA rewarded employees with Smokey T’s for lunch on July 11 as a thank you for their hard work in earning the achievement. 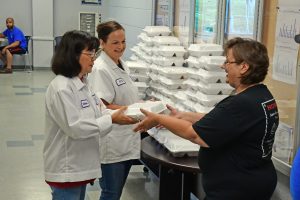 Hideko Mitchell and Amy Mims pass out lunch plates from Smokey T’s in Clanton as a thank you to company employees for their hard work in earning the service award. (J.R. TIDWELL/ADVERTISER)