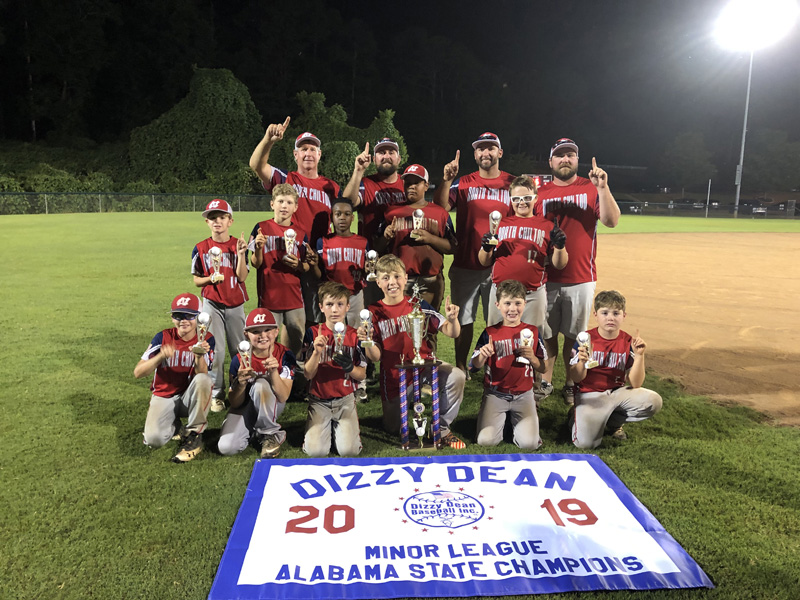 The North Chilton 10U baseball team will compete in the Dizzy Dean World Series on July 12 in Southaven, Mississippi after winning at the state tournament. (Contributed photo)

It has been a busy summer for the North Chilton 10U baseball team, who went on a winning run over the last month.

The team has made the rounds traveling throughout the state over the past three weekends en route to being crowned state champions of their age division.

They kicked things off by winning the district tournament in Jemison and followed it up with an area tournament victory in Pelham before competing for the state championship in Madison.

North Chilton wrapped up the state title with an 11-7 win against the Southside Shockers in the second game of the championship series.

North Chilton was undefeated heading into the finals before losing to Southside 16-13 in Game 1. However, the double elimination format prompted for another contest to be played since it was only their first loss.

One of the things that head coach Eddie Carroll has seen from his team during this run is their ability to continue playing hard until the last out.

This resiliency was on display during the championship series, as North Chilton found themselves down 16-3 in Game 1 only to cut the deficit to three by the end.

Once again they trailed 5-1 early in Game 2 before finding their groove and winning 11-7.

“Pitching and defense has probably been our strong suite,” Carroll said.

John Mason Hammaker went 4-for-4 at the plate in the deciding game, while Kaden Collins also had a lot of key hits throughout the tournament.

Collins is only 9 years old and is one of three new members from last year’s team, which finished runner-up in both state and in the Dizzy Dean World Series.

The Dizzy Dean World Series will begin on July 12 and be held in Southaven, Mississippi.

The North Chilton 10U team will hold a car wash fundraiser on July 6 at Peach Park Express from 8 a.m. to noon in an attempt to help raise money for their trip to compete in the Dizzy Dean World Series.