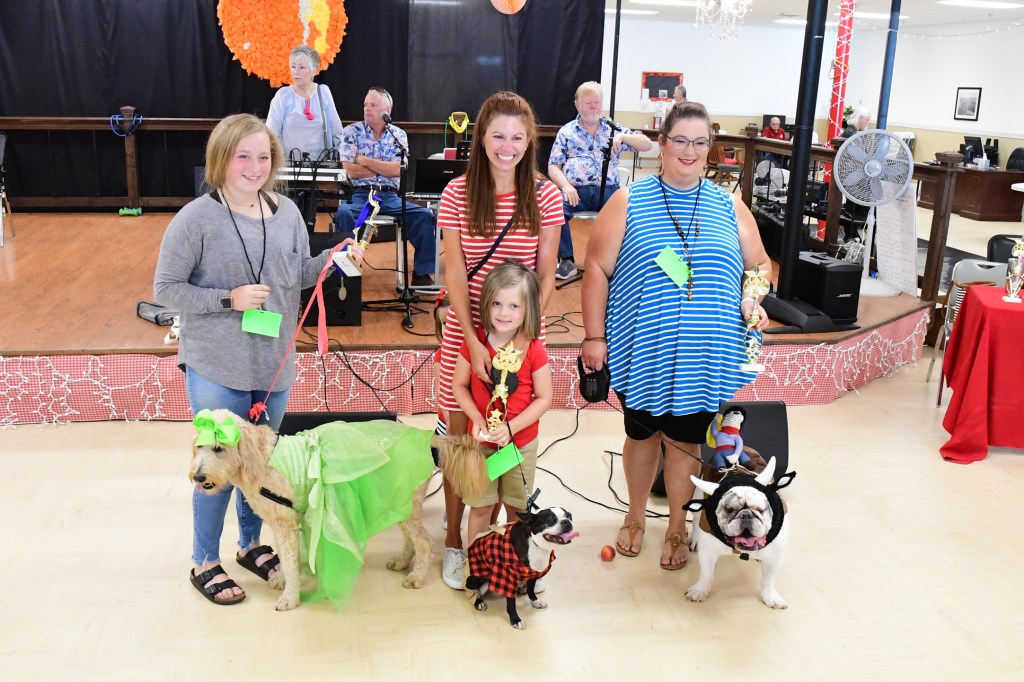 Senior Connection in Clanton hosted its inaugural Doggie Fashion Show as part of the Peach Week festivities on June 27.

Senior Connection hosted the event as a benefit for the Humane Society of Chilton County.

Director Vanessa McKinney said Senior Connection came up with the idea about three months ago while trying to think of some ways to benefit the Humane Society.

“We have been working with them in the past,” McKinney said. “People bring in trash bags for their beds, paper towels and things like that. We decided we wanted to up it and do something a little extra. We decided to add this to Peach Week.”

Nine contestants were entered into the event.

Hudson the Boston Terrier, dressed in overalls and a plaid shirt, came in second place. Hudson is owned by Suzanne and Della Williams.

Beauford the English bulldog, owned by Joanna Davis, was dressed up as a bull complete with rodeo rider. Beauford came in third place.

Each contestant took a walk around the crowd before going before the judges. The name of the dog and its owner was called out.

Included was a list of each dog’s favorite hobby and favorite food.

McKinney said the judges had a hard time picking their favorites from among the candidates.

“I think it went wonderfully,” she said. “We were well received by the community. The contestants came out in full force. For the first one, it was great. They had a great time. The top three was very close, but everybody got a trophy. The crowd enjoyed it. It was as cute as can be.”

After the show had concluded, Charlotte Medley of Senior Connection presented Jeff Melton and Bill Gay, on behalf of the Humane Society, with a check for $370, the proceeds raised by the event.

“I appreciate everybody turning out,” Melton said. “Maybe we’ll do this again next year. I appreciate all the help. The Humane Society has come a long way. We have high expectations, but we’ll get there.”

Melton said the Humane Society had come a long way in dealing with the overcrowding and parvovirus outbreak that recently forced the shelter to be temporarily shut down.

McKinney said the Doggie Fashion Show will continue as an annual event so long as there is good participation.