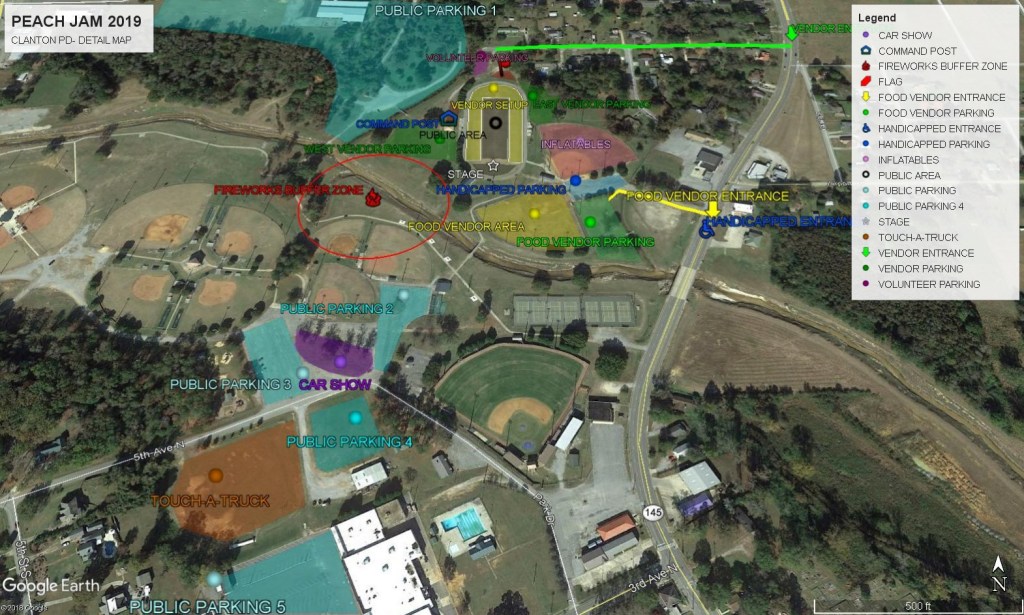 This aerial view shows an expanded layout of where different events will be located at Clanton City Park during Peach Jam. (CLANTON POLICE DEPARTMENT)

There will be many events featured at city park, including a Touch-a-Truck and a Chilton Cruisers car show that begin at 10 a.m.

A few events have been added of late, including an autograph signing with former Alabama Crimson Tide and Birmingham Iron star running back Trent Richardson, who will be set up around 5 p.m.

“I talked with him last Saturday, and he was available,” said Chamber director Francine Wasden. “We were thankful that he said he would come to Clanton. He was a superstar at Alabama. A lot of people will have an interest in seeing him.”

Wasden was hard at work preparing for the big event on June 28.

“So many different things are happening today,” she said. “We are preparing for a big day tomorrow.”

Peach Jam will feature lots of different vendors and opportunities to have some fun.

There will also be a kids zone with inflatables, Central Alabama Electric Cooperative hot air balloon, a pace car from Talladega Superspeedway and live music from Charity Bowden and Jackson Capps.

One other big change will be a fireworks show at 10 p.m., sponsored by RealtySouth, to close out the event.

“All of this is free,” Wasden said. “People can come and bring their kids, enjoy the day and not break the bank.”

Gates will open at 6 a.m. to allow vendors to come in and set up. The photos that accompany this story are also available on the Clanton Police Department Facebook page.

They highlight the different areas of city park and what will be set up there. The photos include which routes different vendors should take when entering the venue.

A previous story on Peach Jam appears below with further information on the event.

The Chilton County Chamber of Commerce has a few changes for this year’s Peach Jam, which is scheduled for June 29 from 3-10 p.m. at Clanton City Park.

The most obvious change is the date itself.

“We usually have Peach Jam on a Friday, but this year it will be on a Saturday,” said Rachel Martin with the Chamber. “That will give people the opportunity to do all the wrap up activities Peach Jam offers. You can go to the parade and the auction, the car show and then come to Peach Jam. You get everything in one day.”

Live entertainment will begin at 5 p.m. featuring Charity Bowden, as seen on The Voice, and Jackson Capps, an Alabama native who plays in Nashville.

Radio personality Dr. Sam of 98.9 WBAM will emcee the event.

There will also be a kids zone with inflatables, Central Alabama Electric Co-op’s hot air balloon, a car from Talladega Superspeedway and the Chilton Cruisers car show.

One other big change will be a fireworks show at 10 p.m., sponsored by RealtySouth, to close out the event.

Peach Jam is free and open to the public.

The Chamber will also be hosting an event the night prior to Peach Jam, Music in the Park.

The event, featuring Blackbird Pickers, is from 6-9 p.m. on June 28 at Corner Park in downtown Clanton.

“Bring your lawn chairs for an evening of live music, fun and fellowship,” reads a flyer for the event.