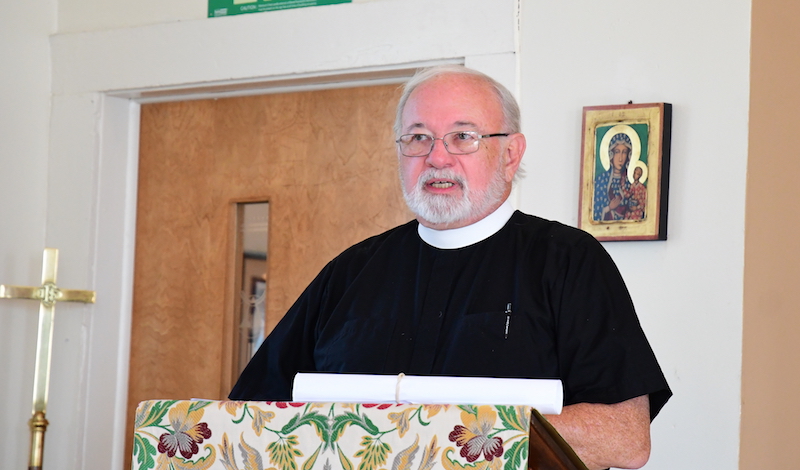 Trinity Episcopal Church in Clanton celebrated the 100th year since the church building was erected on June 20.

The observation included a brief history of the church by former rector Rev. Bill King followed by a time of fun in the fellowship hall.

“Dear Lord, continue to bless this beloved congregation as it continues to support the poor and the hungry and the stranger,” Rev. Deacon Mark Likos said during the opening prayer. “Sustain your people within and without these walls as we are fed physically, mentally and spiritually that we may be beacons of your love and acceptance.”

Likos said King was his mentor as a part of his seminary studies.

“A hundred years ago the street out here was a dirt road that went out to the river,” King said. “There were very few buildings around.”

At the time, the church structure was built by the Seventh-day Adventists to have a central location for a church and offices near the railroad.

“This is probably the oldest continuously-used place of worship in Clanton,” King said.

The sanctuary is the original building, although it has been remodeled a few times. Pine was predominately used in the construction.

“That can continue to be good wood for a couple of decades yet,” King said.

An Episcopal mission had been established in the area in the 1880s. A church was built for the mission to meet in on land donated by the Randolph family. However, Judge Randolph “stipulated if the church did not use the property for church or religious services, it was to be returned to the Randolph family,” according to King.

This happened in 1941 because there was no longer an Episcopal church in Clanton.

Death of prominent members and the church burning down in 1900 were factors in the church closing. King said the structure was made of wood, and there were several things that could have started the fire.

“In mid-1946, a woman by the name of Mitchell began organizing and asking the bishop to establish a church here,” King said.

By this time, the Seven-day Adventist church had outgrown the location and was looking to move.

The Episcopal church rented the building on Sunday while the Seven-day Adventist church held Saturday services for a while.

The church chose the name Trinity Episcopal Church in 1948.

In 1954, Trinity Episcopal Church bought the building in still meets in today.

“It took them five years to get enough money to do a renovation and put in a bell tower,” King said.

In 1975, leadership troubles led to the closing of the church until 1994. The congregation has continued until this day, King said.

In 2005, Clyde Hughes donated funds to buy the bell, named Gabriel, which in now in the bell tower. Hughes had lost his hearing and could not hear it ring until he received an implant to restore his hearing two years before he died, according to King. However, Hughes did enjoy being the first person to ring it.

The bell is still rung each Sunday.

Likos said serving in a place with such history, where King made such an impact to keep the church strong, is intense.

“These people are just wonderful. Loving people,” Likos said. “They bring a lot to the church.”

After serving at the church during his studies, Trinity Episcopal Church asked that Likos be made their next rector.