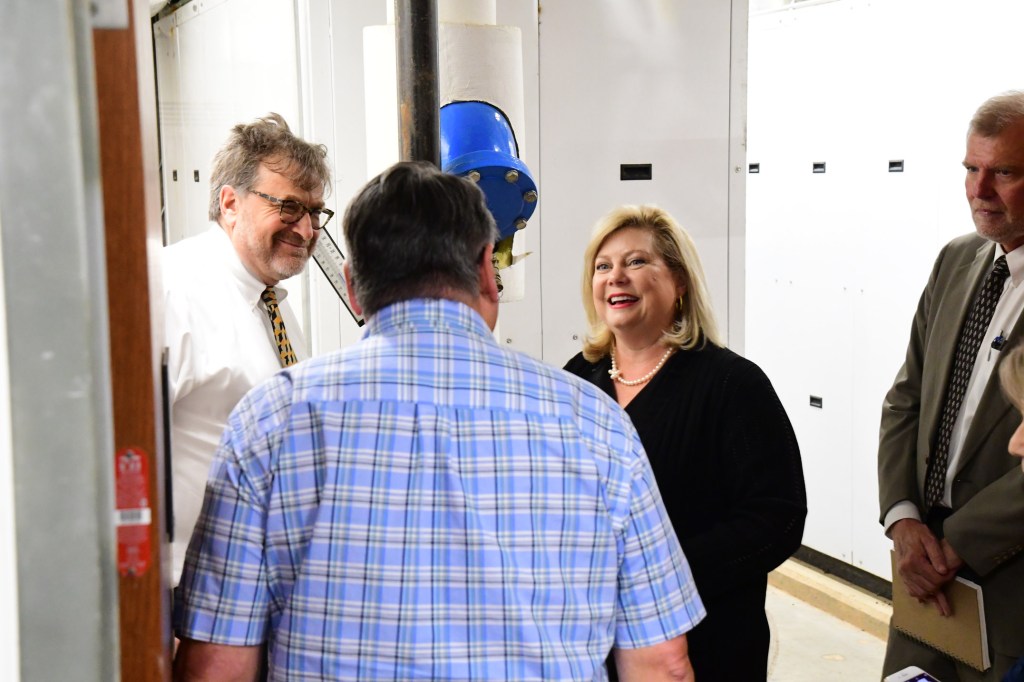 Twinkle Cavanaugh, the president of the Alabama Public Service Commission, took a tour of St. Vincent’s Chilton on June 18 which highlighted systems at the hospital that promote energy efficiency. (J.R. TIDWELL/ADVERTISER)

Twinkle Cavanaugh, the president of the Alabama Public Service Commission, was given a tour of different heating and cooling systems at St. Vincent’s Chilton on June 18.

The tour was co-hosted by Spire, a natural gas energy company, and was designed to highlight how a few different systems at the hospital operate in order to promote energy efficiency.

Shanon Hamilton, who is the interim administrator after the departure of Suzannah Campbell for another network hospital, welcomed the group at the beginning of the tour.

“I appreciate everyone’s attendance here today to look at some of the technology we have incorporated here at St. Vincent’s Chilton,” he said. “I have been here (in Chilton County) pretty much all my life. I was at the old hospital for about eight years. I worked for St. Vincent’s for four years before I was able to come back and get on the front end of this project. It’s very near and dear to my heart. I want the best for this facility, and part of that is making sure it is sustainable.”

Many people who aided with the building of the hospital and the systems it uses were on hand to answer any question that Cavanaugh had.

Among the representatives from Spire was Steve Oakerson, who gave a short presentation about some of the major systems St. Vincent’s Chilton uses for heating and cooling both air and water and how these cutting-edge pieces of tech are so energy efficient.

“This is a fantastic project,” Oakerson said. “A lot of great things have happened. I’m glad to be involved in it any way that I have been. (The hospital) supports this community and the surrounding communities. It’s a great project to be a part of. I consider myself to be one of the luckiest guys at Spire, because I help customers like this with solutions. That’s pretty much what I do, work in research and development.”

In his speech, Oakerson highlighted three major aspects of the hospital that were selected as it was being built to keep power costs down and promote energy efficiency.

“This hospital is very similar to others in many ways but also unique in some of the decisions that were made,” he said.

The system that took the lion’s share of the discussion is called Combined Heating and Power, or CHP for short.

According to the Environmental Protection Agency, “CHP is an energy efficient technology that generates electricity and captures the heat that would otherwise be wasted to provide useful thermal energy—such as steam or hot water—that can be used for space heating, cooling, domestic hot water and industrial processes. CHP can be located at an individual facility or building or be a district energy or utility resource. CHP is typically located at facilities where there is a need for both electricity and thermal energy.

“Nearly two-thirds of the energy used by conventional electricity generation is wasted in the form of heat discharged to the atmosphere. Additional energy is wasted during the distribution of electricity to end users. By capturing and using heat that would otherwise be wasted, and by avoiding distribution losses, CHP can achieve efficiencies of over 80 percent, compared to 50 percent for typical technologies (i.e., conventional electricity generation and an on-site boiler).”

“I believe it is still the only one (in a hospital) in the state of Alabama and one of a few in the Southeast. We are very progressive with that here,” Oakerson said.

A system that heats water for the kitchen, a radiator-like cooling system and LED lighting across the hospital were also discussed as measures taken to promote efficiency and save money on power costs.