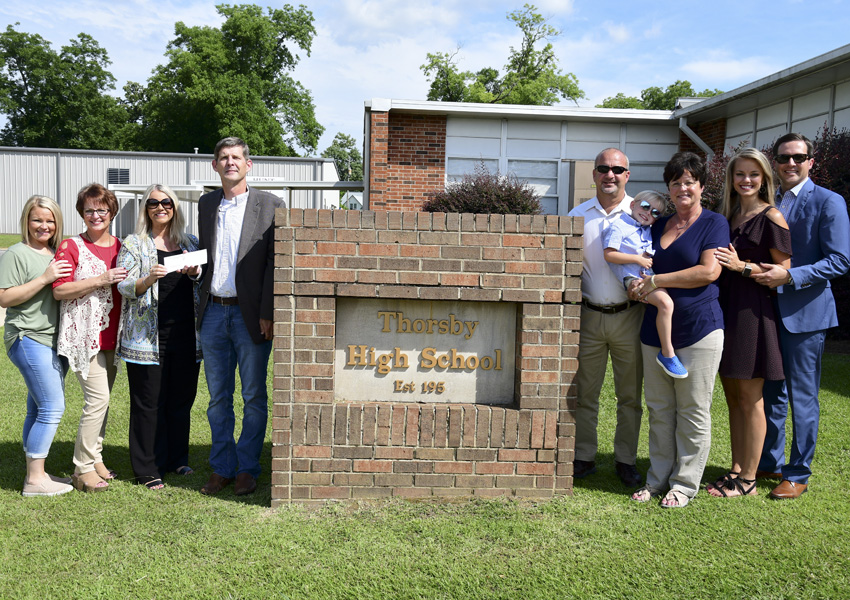 Rep. April Weaver and members of Jimmy Martin’s family presented a grant check to help Thorsby School get a new fence around its playground. (Photo by Anthony Richards)

Former Rep. Jimmy Martin is still making a difference in the community even after his recent death.

Rep. April Weaver presented Thorsby School with a grant check for $1,250 to help fund a project to get a new fence around the playground area in the front of the school.

“Rep. Martin and I had been working on this for several months,” Weaver said. “I know that this was a very important project to him. It’s not enough for the entire project, but it’s what we had left in our grant accounts at the end of the year.”

According to Weaver, she had been carrying the check around for a while as she held on to the hopes that Martin would get well enough to come and do the presentation alongside her.

After his passing, it was only fitting that members of the Martin family were on hand to help Weaver officially present the check to Thorsby.

“To have his family here with me today means a lot,” Weaver said.

The chain-link fence that currently wraps around Thorsby’s expansive playground is old and in need of repair.

“He [Jimmy Martin] was always a friend to the school,” Thorsby Principal Corey Clements said. “He did things for the kids, and you knew that you could count on him to help.”

According to Clements, Thorsby is the only campus in the county with a playground in front of the school, which puts even more importance on making sure that it is properly updated.

“When you pull up [to the school], it’s what you see,” Clements said. “We would like for the first thing people see to be nice and something that catches your eye.”

The new fence is just the latest improvement made to the front of the school after the video board sign, paving around the basketball goals and updating the parking lot lighting.

Clements believes the recent upgrades could even help when recruiting new teachers to the school.

“It’s important for the facilities to look nice,” Clements said. “It will go a long way in the curb appeal of the school.”