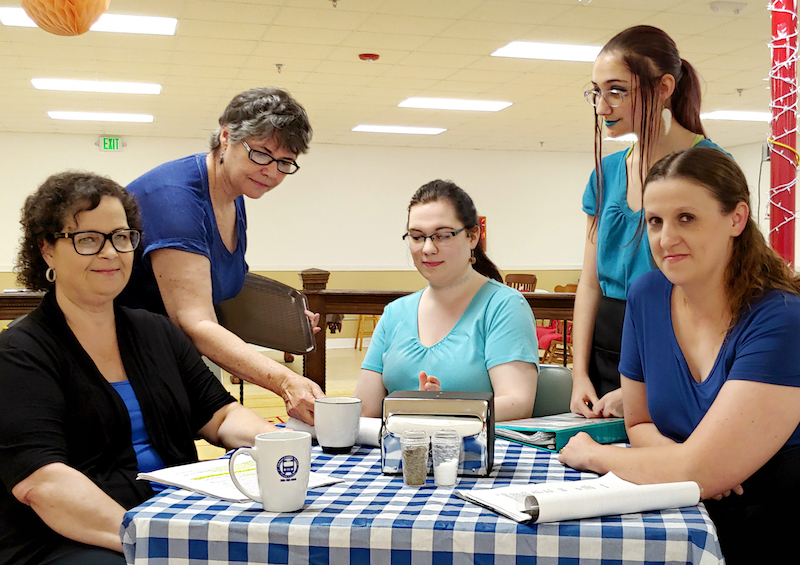 The summer show for the Central Alabama Performing Arts Guild takes a turn toward the mysterious and tasty this year for its first dessert theater in partnership with Senior Connection.

The humorous play “Death by Dessert” is designed to keep the audience guessing to the last minute and having fun all the way.

Adaptations have been made to localize the script, making the setting two rival barbecue restaurants.

“We are having so much fun at rehearsal, I know when people come and see these jokes for the first time … they are just going to love it,” Craig Isley said.

Isley plays Wayne, a henchman for one of the restaurant owners.

“He gets up to some nefarious activities that turn out to be hilariously funny,” Isley said.

“One special thing about this production: the cast is made up of older teens and adults and my stage crew, asst. director and stage manager are all younger students,” director Sarah Jackson said. “We switched the dynamics on this production and it has been an incredible experience. ”

Many of the actors, including Mercy White and Leslie Cleckler, have been in radio plays the Guild has done, but this is their first stage performance with the group.

White and Cleckler voiced characters in the Guild’s radio performance of “The Wizard of Oz” earlier this year.

“It’s a whodunit, and I have always loved mysteries, and so when I learned that the Guild was doing a murder mystery play, I wanted to be in it,” White, who plays a recently hired busgirl, said.  “… I was so excited, and I am so happy that I get to be in it.”

She said the rehearsals have been a lot of fun because of everyone that she gets to work with.

She described her character as shy “very school girlish” and the “love interest of the busboy.”

“I’ve never played a character like that before,” White said.

She said this is the largest part with more movement than she has ever had in a play.

Cleckler, who plays Wanda, said the play was an opportunity for her to broaden her performance experience.

“It has been really fun,” Cleckler said.

Her character is a henchwoman for the restaurant owner but wants to be a chef.

Cleckler has directed two mystery plays at her church and said she enjoys “throwing the audience off to guess who did what.” She said this will be her first mystery play with the community theater.

“People like being involved in the mystery itself,” Cleckler said. “I have noticed that people do usually tend to pay close attention, trying to figure it out.”

Cleckler said “trying to make sure you portray your character as openly as possible without sharing too many details” can be challenging.

An intermission during the performance will allow the audience to get dessert and make a vote as to who the culprit is.

Kay Tippett, who plays murder victim Mary Ann Mims, said the audience participation was “the most fun part to see who figures it out and who doesn’t.”

Tippett said it is interesting playing this part because she has to do a stage fall, which she teaches her Chilton County High School drama students how to do but usually uses a video to demonstrate instead of doing it herself.

The performance has also offered an opportunity for those looking for a creative outlet.

Isley said he has performed in community theater in the past and was looking for an opportunity to continue this when he recently moved back to Clanton. He said he was “pleasantly surprised” there was a character he felt he could play.

“The people have been so nice and welcoming, and it’s a very collaborative environment,” Isley said.

Isley said community theater is important because get gives people a creative outlet while giving residents a chance to see a live production.

Abby Mann, who plays a waitress, said she wanted to participate because she had recently moved to the area and wanted to continue being a part of a theater group.

“My character is really enjoyable, and the play is very fun,” Mann said.

She said not doing anything to reveal the culprit too soon can be a challenge. She said the play has some twists to keep the audience from figuring it out too early.