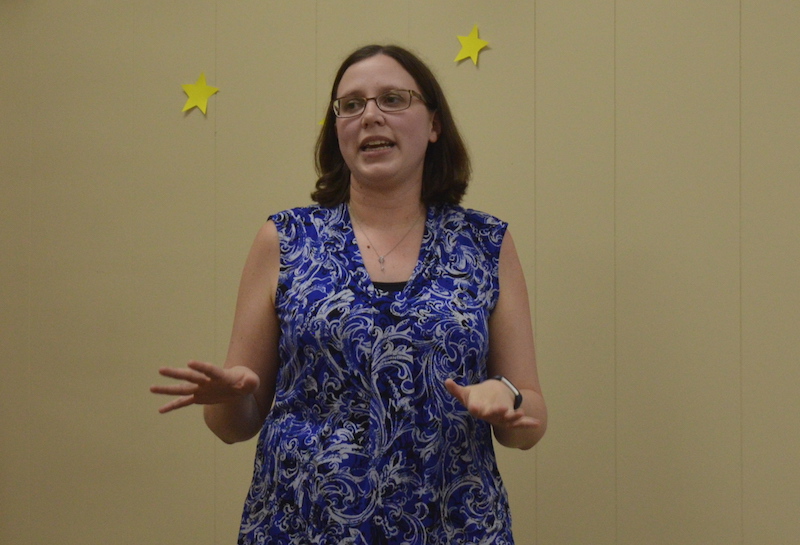 Courtney Pinkard talks about the basics of genealogy. (JOYANNA LOVE/ADVERTISER)

Courtney Pinkard of the Alabama Department of Archives and History shared tips for getting started in researching family history at the Chilton/Clanton Public Library celebrated on June 10.

“Probably 85 percent of what we do in our research room is genealogy, so I do this all day every day,” Pinkard said.

The Archive assists those who come in person and those from out-of-state needing information.

She reminded the audience that any records for the area prior to 1867 would actually be for Autauga County because Baker County (the original name for Chilton) had not been established yet.

Pinkard said anyone looking to research their family tree should start with family records, Bibles and photographs that they already have. She said looking for records at home can turn up everything from birth certificates to old letters and newspaper articles about one’s relatives.

“Talk to your older relatives or older family friends that might be able to give you more information about people maybe who have already passed on,” Pinkard said.

She said it is important to make notes of the dates and places of birth, death and marriage, which could be verified later by government records.

Knowing where family members lived and went to school can also be important.

Pinkard recommended organizing information on a chart starting with one’s self and working back in time in order to keep a written record of the research.

“The most important thing is that you develop a plan of research,” Pinkard said. “Identify what you know, what you don’t know, then you can actually start doing the research after those gaps are established.”

Pinkard said writing the names of who is in old family photos in pencil on the back of the photo is helpful.

Census records are a vital resource in tracing one’s family.

“I like to call the census record the bedrock of genealogy because all of our family trees sprout up from there,” Pinkard said.

The most recent census available is 1940.

Pinkard said information from the census record will help researchers know where to go next.

“It is important to remember that these were human beings writing down this information, so mistakes can and do happen,” Pinkard said.

Census records have been made available electronically with Ancenstry.com being a popular way to access them. The Alabama Department of Archives and History provides use of this site through a library subscription in the research room at 624 Washington Ave. in Montgomery.

She said misspelling of names, dates and children not being listed has happened. Population schedules for Alabama begin in 1820 and run through 1940, except for the 1890 census which has been destroyed. In certain years, information for slaves, mortality rates, agricultural schedules, industry schedules and social statistics are also available. Pinkard gave examples of each during her presentation.

The 1850 census is the first to list names of people in a household other than the head of the household. By the 1900 census, the year of arrival for immigrants was included in the census record. In 1930, whether or not a person was a veteran of a war and which war they fought in was included.

Local government records, such as marriage, birth, divorce, wills, probate court and land records, can also be helpful in learning about one’s family. However, the state of Alabama did not issue birth certificates prior to 1908.

Marriage records from 1936 and later are held by the Alabama Department of Public health (adph.org).

Additional recourses are available at archives.alabama.gov, familysearch.org and findagrave.com.