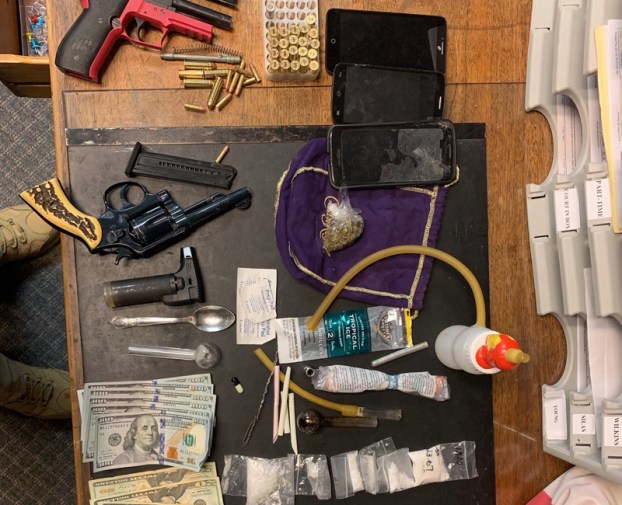 Thirty grams of methamphetamine, marijuana, guns and other drug paraphernalia were found following a drug bust in Thorsby on June 12. Four children were also taken from the residence by DHR. (Contributed photo)

Four children were placed in DHR custody following a drug arrest that happened at a residence in Thorsby.

According to a Thorsby Police Department press release, it was a two-day course of events that led to the arrest.

On June 11, Thorsby Police officer Patrick Young and reserve officer Phillip Blake went to look for an individual at 2130 County Road 627 that the town held warrants for.

However, that person was not at the address, but a man named Roger Dale Underwood was.

The press release stated that after talking with Underwood, police discovered he had warrants nationwide, as well as a meth pipe in his possession along with a backpack.

Further drugs were discovered including 30 grams of methamphetamine, marijuana and other drug paraphernalia along with a pair of guns.

The guns were a Sig Sauer .22-caliber handgun and a .38 Special Smith & Wesson.

While the drug and weapons were being discovered it was also noted that children were on the premises.

A search warrant was obtained the following morning on June 12 and the officers went back to the residence and four children were removed by DHR.

Additional drugs were found following a more extensive search of the residence.

“I would like to commend all these officers for their work in this case,” Thorsby Police Chief Rodney Barnett said.

The Chilton County Commission approved the service of Stacy McKean with Grant Management to help the county apply for an... read more