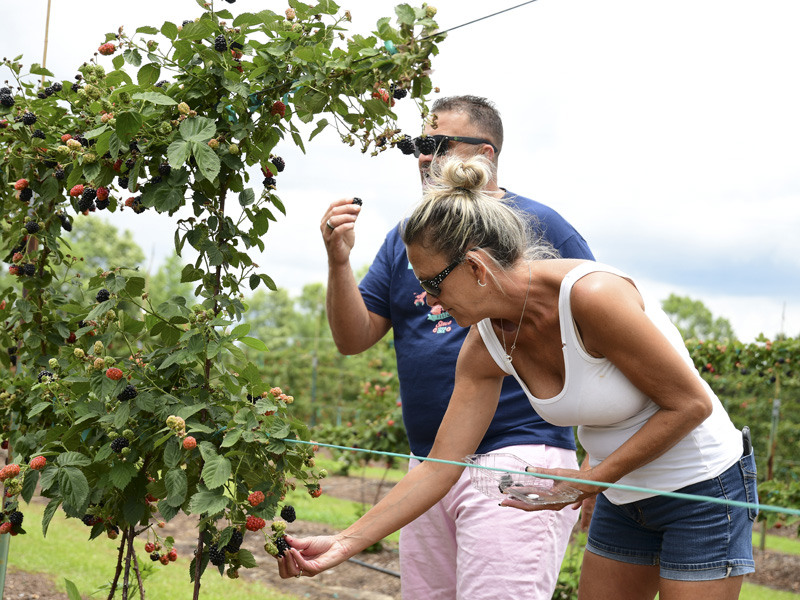 The opportunity to pick your own blackberries is an option at Petals from the Past. (Photo by Anthony Richards)

The Black and Blueberry Festival has become an annual event at Petals from the Past for roughly the past 20 years.

For nearly the length of the Jemison business’s 25-year history, it has taken part in an event to celebrate the start of the blackberry and blueberry seasons.

“It’s pretty much ingrained,” Dr. Arlie Powell said. “The blackberry is a fantastic fruit and is highly nutritious.”

The Blackberry Queens were on hand to welcome visitors and take part in the festivities.

Blackberries are the state fruit of Alabama, while peaches are considered the state’s tree fruit.

“Blackberries are native to the area, and we’re growing the Kiowa variety after a lot of work and a lot of years of trying different varieties,” Powell said. “It’s a big berry and it produces well, but the downside is that it’s thorny, but blackberries have been thorny for a long time. Only recently have they come out with really good thorn-less ones.”

However, there is always a battle that must be waged for growers and at the moment it is viral.

“There’s a viral complex that has hit blackberries across the whole area of the southeast,” Powell said. “That has made it tough.” 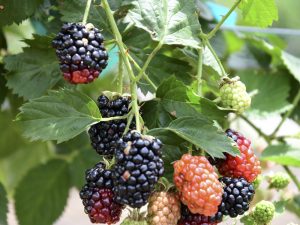 Dr. Arlie Powell suggests waiting until a blackberry is ripe in order to get full flavor. (Photo by Anthony Richards)

One of the reasons why Kiowa is the dominant variety at Petals from the Past is due to its resilient nature.

“It’s the only one I’ve found so far that hasn’t died after four or six years,” Powell said. “We’ve got [Kiowa] plants here that are 20 years old.”

Due to blackberries not being an overly sweet fruit, Powell stressed the importance of waiting until the berries are ripe before picking.

“We will allow our fruit to hang one or two days longer than anyone else,” Powell said.

The down side to picking the fruit later is that it has a less longevity.

“Blackberries are a lot like strawberries in that you don’t have a long shelf life,” Powell said.

According to Powell, this year’s crop of blackberries are about a week early and a large portion of the blueberries have started to ripen about 7 to 10 days earlier.

“We started [the process] earlier and consequently everything just kept going that way,” Powell said.

Due to the forecast of rain, there were less people attending the festival than in recent years.

Powell estimated the crowd would have doubled or even tripled in size if not for the threat of rain.

“We thought we were going to be blown away with rain,” Powell said. “At 7 a.m. this morning, it rained over an inch in 30 minutes here but when it quit, it quit. It has held off beautifully.”