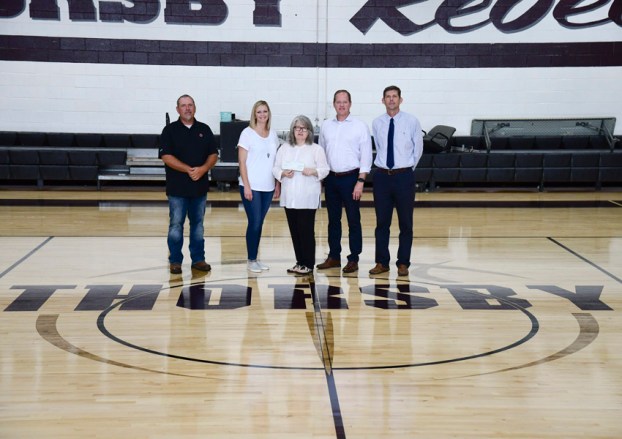 The Thorsby basketball program will have an eye-catching court to play on next season after the school recently re-painted the floor in the gym.

The floor is now two-tone with the area inside the three-point line a darker shade than beyond the line and the center of the court. It took about eight days for the project to be completed.

Sen. Cam Ward presented the school with a grant check of $8,000 to help pay for the project. Another $2,000 is expected to be given in the fall.

According to Clements, they looked at images of different courts online and also took some ideas Abbeville’s court after traveling down there in the state playoffs. 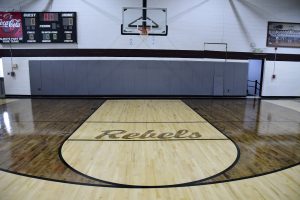 The floor of the Thorsby gym now has a two-tone color scheme. (Photo by Anthony Richards)

“I love Thorsby,” Ward said. “To see the way the court looks now, really shows that they are making good use of the money and the resources they have.”

One of the interesting aspects of the court is that there is no white in either the lines or the lettering.

“I love the way white looks, but when you put it on the floor and start varnishing it, over time it turns yellow,” Clements said.

The gym is not only used for Thorsby athletics, which include basketball and volleyball, but is also the host site for the North Chilton youth basketball league. 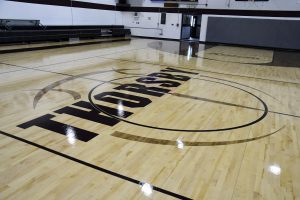 It took about eight days for Thorsby’s gym floor makeover to be completed. (Photo by Anthony Richards)

The floor is just the latest upgrade in the long-term plans for the Thorsby gym.

According to Clements, they are looking into adding TV monitors in the gym and the concession stand lobby, as well as possibly moving the ticket booth downstairs where it used to be.

“We’ve got a lot of ideas right now,” Clements said. “It’s kind of a summer project to get our gym looking as good as we can get it. The most economically-intensive part was getting the floor right.”

Clements believes the new court is something that Thorsby student-athletes can be proud of.

Giles’s breakout season leads to player of the year