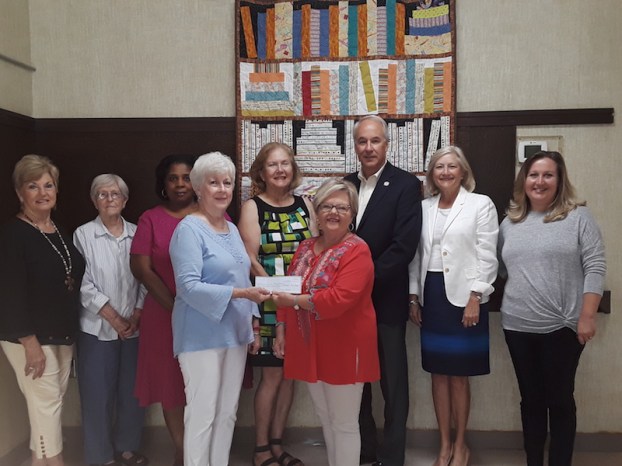 The Chilton County 150th celebration last year was a success and brought in a good amount of money through vendors and T-shirt sales.

The celebration committee presented $3,629 in leftover funds to the Chilton-Clanton Public Library on May 28.

“The library was such a big part in that anniversary celebration,” Billy Singleton of the 150th Committee said. “They had activities and events here, not to mention the repository of most of Chilton County’s history through their newspaper archive and genealogy section.”

Committee member Mary Mell Smith said the committee used the library meeting room for almost a year, “and they never charged us anything and they were very accommodating.”

Singleton said these factors and the “vital role” the library plays in Chilton County is why it was selected as the recipient of the funds.

Library board chairman Jane Mason and library bookkeeper Darlene Brock said the funds will likely be used to upgrade internet services and funding programs for children.

“I am just so excited about the opportunities for the library,” Mason said.

She said the library wants to be ready for the expected growth after the Alabama Farm Center at ALFA Centennial Park is completed three to five years from now near Interstate 65, Exit 212.

“We want to be on the cutting edge,” Mason said.

Since the library staff only found out about the 150th committee presenting the funds a few days before it happened, Brock said the library is also looking at other needs the money might fill also.

The Chilton-Clanton Public Library board is in the midst of a search for a new library system director following the resignation of Savannah Kitchens. Kitchens accepted a job as director at the Parnell Memorial Library in Montevallo.

Mason said the board has received several resumes that will be reviewed at the June board meeting.

Applications will be accepted until June 21.

The plan is to narrow the field to three possibilities.