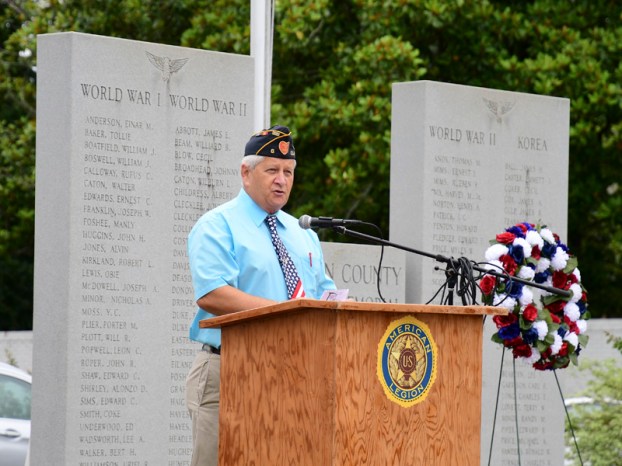 Memorial Day this year is on May 27. At least two groups in Chilton County will be hosting events that day in honor of those who have fallen while serving in the United State military.

American Legion Post 216 will be placing flags on the graves of their fallen comrades.

The group will be meeting at Martin Memorial Cemetery in Clanton at 8 a.m. Post 216 will go from there to Clanton City Cemetery across from the Chilton/Clanton Public Library.

There will also be a Memorial Day program at the Chilton County Courthouse at 10 a.m.

Rex Ray will be the guest speaker, with a wreath laying performed by Harold Garrison and Myra Headley.

temporary bleachers were set up in front of the war memorial monument next to the courthouse for those who attended.

Pete DeLeon was the guest speaker. He served in the United States Air Force after his family emigrated from Cuba, and he became a citizen at 16 years old.

“I ask God to bless America and what it has stood for,” DeLeon said during the ceremony.

Throughout his speech, he shared what Memorial Day means to him.

“If we truly want to honor them [military members who have died serving], we must do our part,” DeLeon said. “No matter how small or big, we must honor those that have fallen.”

Following DeLeon’s speech, the names of 106 former Chilton County residents that died during military combat were read along with the war they fought in.

Anthony Richards contributed to this article.