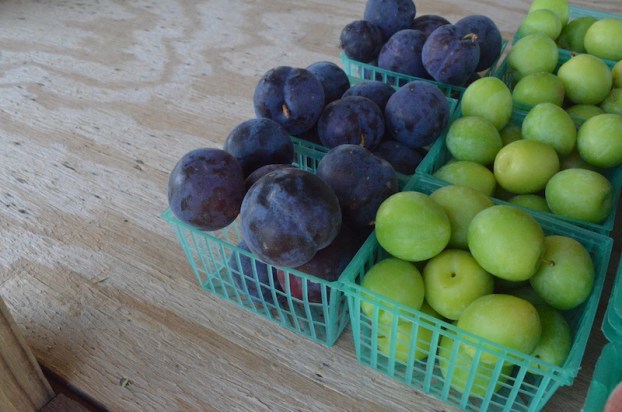 Plums, both green and the darker varieties, are being harvested in Chilton County. (JOYANNA LOVE/ ADVERTISER)

Chilton County is best known for peaches, but there is a wide variety of other produce grown here.

As the strawberry season is coming to an end due to high temperatures, plums are starting to be ready to pick.

Scott Penton of Penton/Sugar Hill Farms said a frost after the plants had already bloomed killed much of the early crop.

However, he still expects to be harvesting them through June.

The late frost also hurt the crop at McCraw Farm, where plums are usually available for residents to pick their own. The plum crop was wiped out this year, but the farm’s blackberries are still growing on schedule.

Penton said his farm has 20 or more varieties of plums that are ready at different times in the season. Some of these varieties are better when they are green and have a sour flavor, while other plums ripen to an almost black and have a sweeter flavor.

“You can make jelly out of it, or you can just eat it,” Rachell Penton said of the best way to eat a plum. “Most people eat the green ones with salt.”

The Pentons have different views when it comes to which variety is better. Rachell likes the green ones, while Scott prefers the darker ripe ones.

Scott Penton described the methley variety as “probably the best tasting ripe plum we have.”

“At the beginning of the season, they (customers) are looking for these green plums,” Rachell said. “They are only here for a short season … about a month. They will drive for a long ways to get those green ones.”

Scott said there are people who wait all year for the green Bruce variety to be ready.

While the Sugar Hill stand was open selling strawberries, early plums were also being sold.

This year, Scott Penton said he thinks the crop will make it that long this year as well.

The first peaches of the season are also being harvested at Penton Farm.

Plums and early peaches from across the county have also made appearances at the Pierce Farms produce stand, Durbin Farms Market and Peach Park.

Green plums are also available at Todd’s Produce in Clanton.