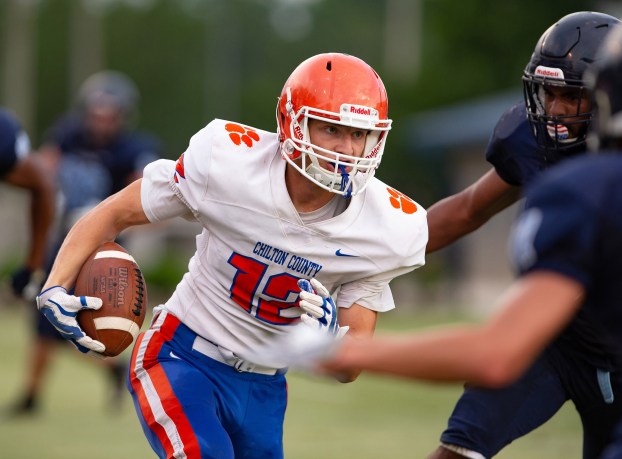 Coaches and fans alike will agree that springtime football games do not count for much, but for the Chilton County Tigers and the Calera Eagles, this year’s game between the two schools afforded each program a glimpse at the work needed this summer.

Penalties, turnovers and missed assignments were issues both teams battled throughout the night and will give both coaching staffs plenty to go over in the coming weeks leading up to next season.

However, there were several bright moments had by each program as well.

Each school’s varsity team would get the action started. Having won the opening coin toss, the Eagles would choose to take a look at their offense first.

Christopher Cotton-Taylor would prove to be the Calera workhorse all night and would pick up the game’s first first down on the second play of the contest thanks to an 11-yard scamper that would move Calera out to the 37-yard line.

However, a pair of short runs and a deep sack would see the drive come to an end on a punt.

The Chilton County fans in attendance would get their first glimpse at this coming season’s Tiger offense, and CCHS would not disappoint. Setting up at their own 45, Devonta Robinson would pick up the Tigers’ first first down on a pair of runs, while quarterback ShiKeem Laister would break lose for 22 yards to move CCHS down inside the Calera red zone.

Three plays later Laister would find pay dirt on a 3-yard touchdown run, and with the PAT by David Threatt, the Tigers would host an early 7-0 lead.

The Eagles’ ensuing possession looked poised to put Calera in position to tie the game after a long run by Noah Williams and a 41-yard connection between quarterback Edwin Karanja and Dylan Killingsworth. However, a fourth and 3 play at the Chilton County 21-yard line would see the Tigers stuff an Eagles rushing attempt while turning the ball over on downs.

A quick three and out by the Tigers would turn the ball over to Calera, who would pick up a pair of first downs on runs by Cotton-Taylor and Kobe Prentice. The Eagles would again move down near the Chilton red zone before another deep sack by the CCHS defense would bring the drive to an end while also ending the first half.

The first possessions of the second half would belong to the starters and would see Tigers come up short of the end zone while the Eagles would put together a 55-yard scoring drive that would tie the game at 7-all.

A 17-yard connection between Karanja and Shoddie would move Calera out near midfield, where an 11-yard run by Prentice would move the ball down near the red zone. Two plays later and a 28-yard touchdown pass from Karanja to Quidarius Crews would tie the game early in the third quarter.

Ensuing possessions by both squads would see no change in the score, while a turnover by the Tigers on the Calera possession would set the Chilton offense up first and 10 at the Calera 40. One play later and quarterback Sam Smith would connect with Jakobi Albert for a 40-yard touchdown pass that would proceed a PAT by Austin Cooedy that would give the Tigers a 14-7 lead early in the third quarter.

Turnovers and scoreless possessions would be the theme of the remaining 18 minutes, as both squads would give their respective coaching staffs plenty to go over during the long summer months.

“There is a lot of things we need to work on,” said Chilton County head coach Tal Morrison. “We had three dumb penalties and a couple of cases where we got lazy with out coverage that hurt us. We got tired late and started arm tackling and diving at ankles and just playing soft football. There was no area of our game that was perfect. I tell them all the time that you will never be perfect, there was only one person to ever walk this earth that was perfect, and none of us are Him. However, I am going to push for perfection and I am going to demand perfection out of them so there will always be things to work on.”

Laister would lead the Chilton rushing attack with 33 yards on four carries, while Smith would lead through the air with one pass for 40 yards.

Karanja would end the game with a 7-for-11 performance passing with 115 yards and a touchdown while Cotton-Taylor would lead the Calera ground game with 52 yards on eight carries.

The Nutrition Spot open in Clanton