The Chilton County Chamber of Commerce hosted the Coaches Corner event on May 14.

As the name implies, high school football coaches from around the county attended the event along with some of their players.

“Potential” was a popular word being thrown around the room by both coaches and players regardless of the school they represented.

The event was moved to the spring after being held in the fall last year.

The timing meant that most coaches spoke about spring practice and how the prospects are shaping up for next season, although it is still early days.

Several coaches were happy with the positive numbers of students that were coming out to participate in the team activities in the spring.

“Interest is up, and we’re excited about that,” Isabella head coach Tate Leonard said.

As is the case for most schools, the initial mission is to replace the voids left by the seniors who graduated.

Chilton County High School is looking to replace 18 seniors from a team that made the playoffs.

However, starting quarterback Shi Keem Laister remains confident that the pieces are in place to build upon the success. 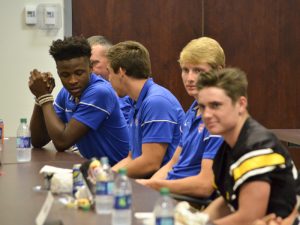 “We’ve got a lot of young guys working hard to take those spots,” Laister said. “I think there excited just to have that chance to go at it again.”

He looks to continue the upward momentum, as he will embark on his second season as the Tigers’ full-time signal caller.

“We’ve got a lot of holes to fill, but we’ve seen a tremendous amount of competition,” Jemison head coach Van Clements said. “We’re going to have depth that we haven’t had in the past.”

Then-Maplesville head coach Brent Hubbert spoke about encouraging his players to play sports across the athletic program, instead of singling out just one.

Maplesville’s starting quarterback Jackson Abbott is one who embraces being a multi-sport athlete.

“It really helps get everybody involved within the athletic program,” Abbott said.

Thorsby is coming off a record-setting season, especially on the offensive side of the ball.

The majority of the players that helped put up those elevated numbers have now moved on.

“We have some big shoes to fill,” Thorsby head coach Daryl Davis said.

The Rebels have two starters returning on offense and three on defense from last year’s squad.

The elephant in the room was the absence of representation from Verbena. Superintendent Jason Griffin addressed the situation to the crowd.

“They are currently in the process of evaluating having a varsity football team,” Griffin said. “They have not decided yet.”

According to Griffin, the AHSAA does not have a strict summer deadline in which a decision has to be made as long as it is made prior to the start of the season in the fall.