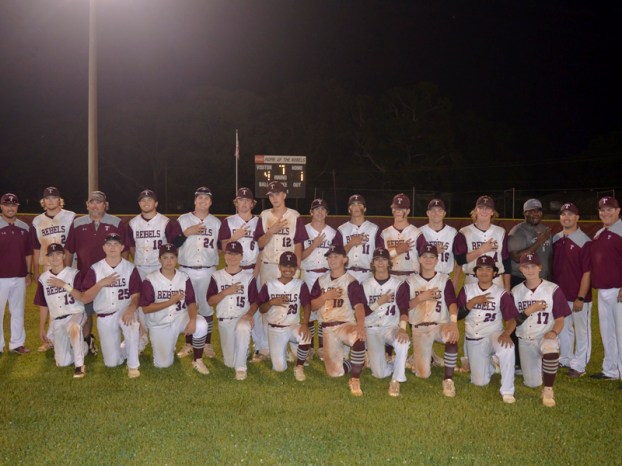 The Thorsby baseball team holds up four fingers after clinching a second consecutive trip to the state semifinals in Class 2A. The Rebels wound up losing to G.W. Long in three games. (Photo by Anthony Richards)

The Thorsby Rebels have been blessed with athletically talented senior classes the past two years.

The result has been back-to-back banner years of success across the athletic program.

On the baseball side of things, the Rebels just completed a second-straight run to the Class 2A state semifinals.

“To be able to do that [semifinals] back-to-back years says something about their drive,” Thorsby head coach Billy Jackson said. “They saw how much it meant to the community, and took ownership of it.”

Thorsby was the only team to defeat eventual state champion G.W. Long during the postseason. The Rebels did so with a 9-5 victory in Game 2 of the semifinal series.

According to Jackson, he began coaching the current crop of seniors in Little League when they were in about the third grade.

“I always told them that if they stayed together, they had the chance to do something special,” Jackson said. “They really bought into that, which I feel was the key to the success.”

This year’s trip to the semifinals was far different from the year before. The Rebels lost Game 1 both years, but they were determined not to be swept again the second time around.

“We preached all offseason to mentally prepare ourselves for adversity and focused on how they would respond,” Jackson said. “This group didn’t make excuses. I told my youngest son to look at these guys if you want to know how to do things the right way.”

Thorsby hosted this year’s semifinal matchup, which allowed the Rebels to put on a show in front of the same fans that had supported them every step of the way along the journey.

Billy Jackson was able to coach his oldest son Tyler in recent years, but he will step down from the duties as head coach heading into next season.

“It [the success] has nothing to do with me because good players make good coaches,” Jackson said. “They did all the hard work and laid the foundation. It’s been a good run.”

The Thorsby Rebels and Verbena Red Devils have advanced to the state softball tournament in their respective classes. Thorsby plays... read more