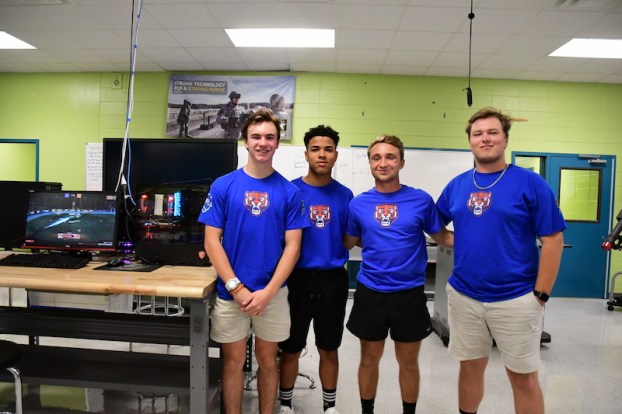 Esports team makes it to final four in state

The Clanton Tigers esports team from Chilton County High School made it to the final four in Rocket League on May 9.

Going into the quarterfinals, the team was tied for second in the state.

During the quarterfinals, the team had beaten Baker High School to advance to the semifinals.

However, in the semifinals, the team lost to McGill Toolen in the final game, ending this year’s season.

Rocket League is kind of like virtual soccer, but played with cars hitting a ball instead of people.

Senior Griffin Beutler said “practicing a lot and just knowing the game” is what helped the team have such a successful run.

Junior Luke Dale said the experience teammates had with the game and their friendships with each other contributed to the team’s success.

Teammates would log into the game from their homes and play together almost every day, Beutler said.

Dale said being on the team also helped him develop better communication skills.

While Rocket League can be played on a home gaming console, the team accesses it through an online gaming site called Steam at school. The team competed from the LeCroy Career Technical Center STEM Academy classroom.

Dale said he wanted to join for the same reason.

This school year was the first-time Chiton County Schools had esports teams, and it was the first year for the AHSAA to sanction video game competitions as an official high school sport. There were 50 teams divided among three games competing in this inaugural season.

Jay LeCroy and Jason Sosa served as coaches for the 5 CCS teams that started the season.

LeCroy said there was a lot of interest from all of the high school, and he hopes to increase the number of teams next year.  Teams have to be made up of students all from the same school. However, schools can have multiple teams.

By JOYANNA LOVE/ Senior Staff Writer The harvest has been plentiful in the first year of the expanded raised bed... read more