Stamp Out Hunger Food Drive May 11 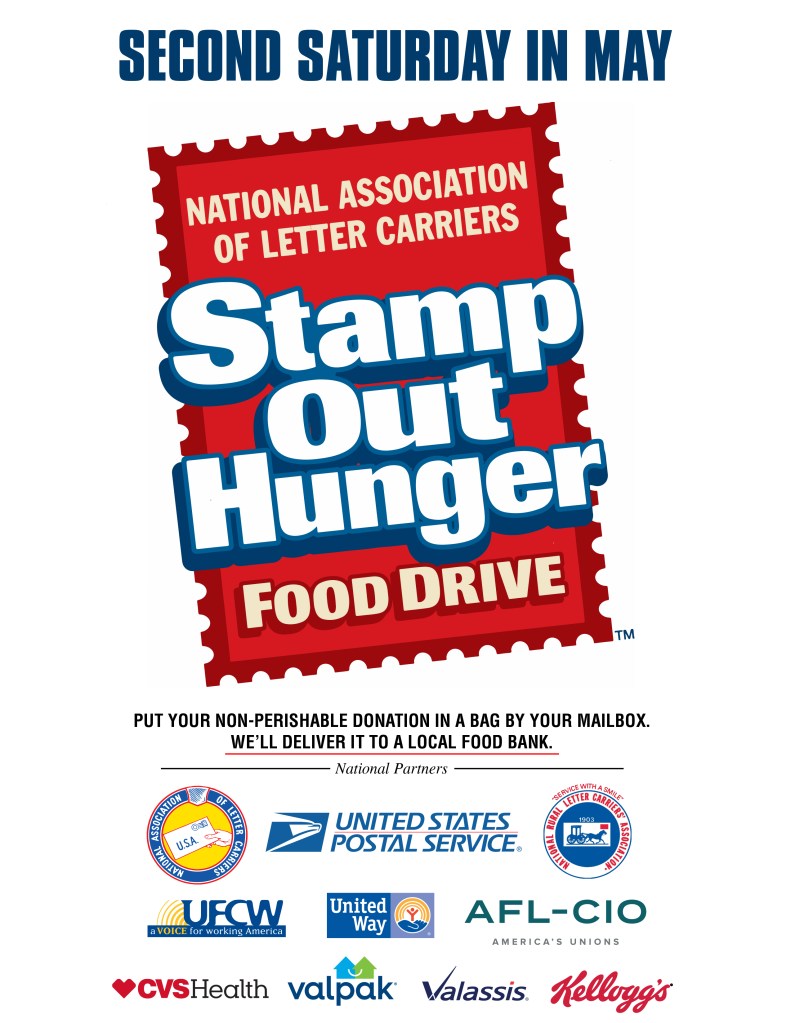 The National Association of Letter Carriers puts on the Stamp Out Hunger Food Drive each year. (CONTRIBUTED)

The annual Stamp Out Hunger Food Drive hosted by the National Association of Letter Carriers will be Saturday, May 11.

Clanton Post Office is once again participating in the event this year. As such, Clanton postal carriers will be collecting donated non-perishable food items that are left on or near customers’ mailboxes during their normal rounds.

The drive is held each year on the second Saturday in May.

According to the Stamp Out Hunger website, “The top requested non-perishable food items are: cereal, pasta, pasta sauce (in cans, not glass) or spaghetti sauce, rice, canned fruits and vegetables, canned meals (such as soups, chili and pasta), 100% juice, peanut butter, macaroni & cheese, canned protein (tuna, chicken and turkey), beans (canned or dry). You also can donate healthy, low-sodium, low-sugar items such as beans, oatmeal and other whole grains, and canola or olive oil.”

“Most of the time people put the bags of food on the ground near their mailbox,” said Clanton city letter carrier Adam Moyes. “They can get dirty or covered in ants. We suggest hanging the bags on the mailbox or putting the food in the mailbox itself.”

Please do not donate frozen food, homemade or home-canned foods or anything past its expiration date, per the NALC website.

The donations benefit local food banks. Moyes said the Clanton Post Office has given to groups like Through the Grace of God Ministries in the past, which puts together meals for those who need them.

“I think (the food drive) is pretty important,” he said. “I enjoy helping put it together.”

Rain is in the forecast for Saturday morning, and the NALC reminds residents that plastic bags hold up better than paper ones in wet weather.

According to the NALC website, “A national, coordinated effort by the NALC to help fight hunger in America grew out of discussions in 1991 by a number of leaders at the time. A pilot drive was held in 10 cities in October of 1991, and it proved so successful that work began immediately on making it a nationwide effort.”

As of 2010, the drive surpassed 1 billion pounds of food collected over its history nationwide.