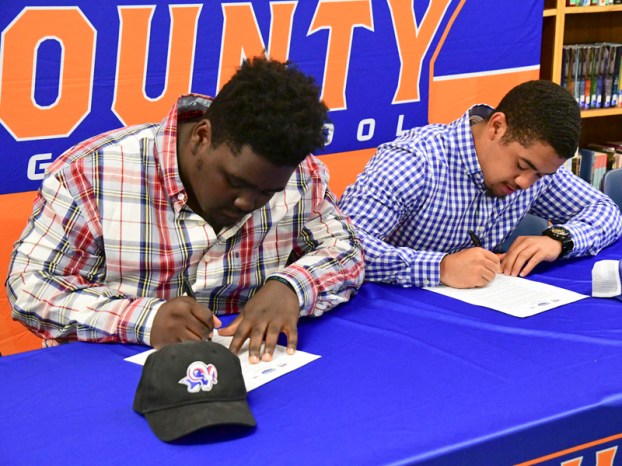 Xavier Trimble and Cameron Wright of CCHS signed to play football at Bluefield College in Virginia on May 7. (Photo by Anthony Richards)

For Xavier Trimble and Cameron Wright, the recruiting process was a quick one.

Both CCHS seniors took a trip to visit Bluefield College in Virginia and wound up signing to play football at the school only a week later.

The two signed in front of a crowd of spectators in the CCHS library during a ceremony of May 7.

According to Wright, he understands there will be a transition that lies ahead going from high school to the college level.

“It will be good to have someone familiar along for the ride,” Wright said.

The size of the Bluefield, Virginia, community where the campus is located reminded both of them a lot of Clanton. 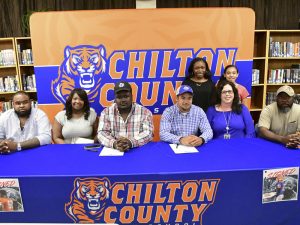 Both players were surrounded by family members during the ceremony. (Photo by Anthony Richards)

Both will continue to play the positions they are most comfortable with.

Trimble will line up along the defensive front, while Wright will be a member of the backfield.

One of the things that they are most looking forward to is the opportunity to come in and compete for playing time right away.

“It’s a great feeling to know that you can make a difference right away if you put in the work,” Wright said.

Both players were key contributors in CCHS football’s playoff run this past season.

“We hope that we laid the foundation for the future of the program,” Trimble said.

The state semifinals have become familiar territory for the Thorsby Rebels baseball team, who are among the final four teams... read more