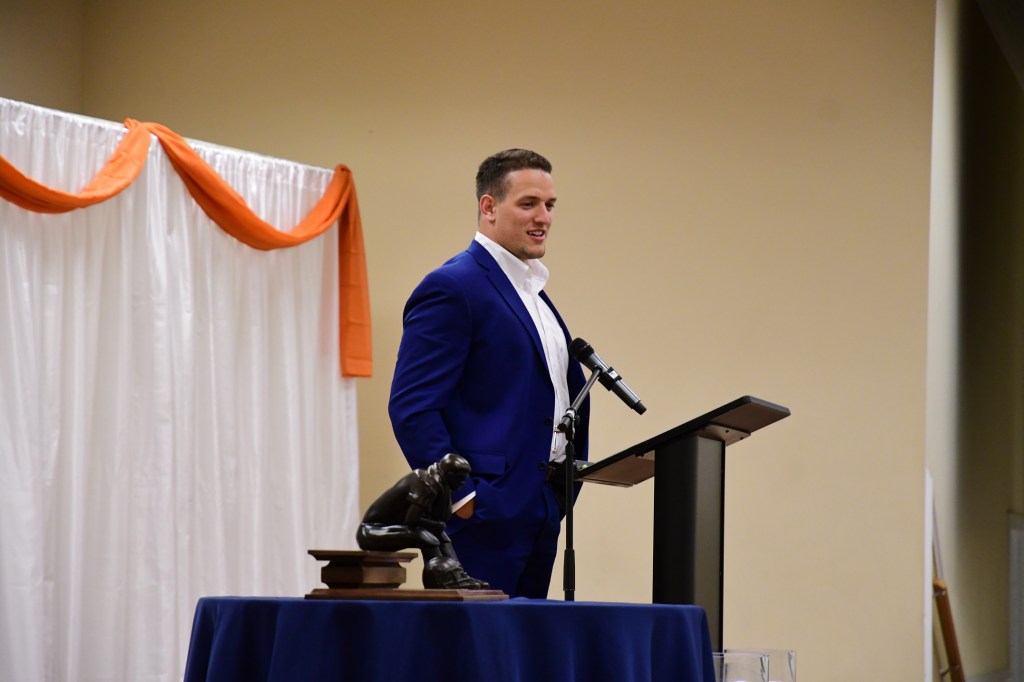 The idea behind the Unsung Hero banquet is to honor someone tied to Auburn University who has been an integral member of a group but may not have been highlighted as much as warranted.

Cox was a four-year starter at Auburn from 2015-2018. His roles as both fullback and H-back meant he spent more time blocking for teammates than amassing his own numbers.

He tallied four touchdowns (but helped set up many more) in 52 games played, 41 of which were starts.

“Chandler has always been passionate about football,” said Auburn tight end and H-backs coach Larry Porter, who was the guest speaker at the banquet.

Porter said that Cox would play so hard in practices throughout the week that he would have to pull him out sometimes, “because I needed him on Saturday.”

Cox is from Apopka, Florida, but a visit to Auburn made him choose that school over offers from rival institutions.

“I took a visit to Alabama the day before I came to Auburn,” Cox said. “There was no comparison. Auburn is so much better. A lot of people ask me what makes Auburn special, and it’s you guys (fans and supporters). It’s not the athletes who play, it’s you guys.”

Cox was recently selected by the Miami Dolphins in the seventh round of the 2019 NFL Draft.

“That was pretty special for me,” he said. “That has been a dream come true for me. I have been watching the Dolphins since I was a little kid.”

While making it to the NFL has been his dream, Cox said he will miss his time on the Plains.

“Coach (Gus) Malzahn extended a scholarship to me,” he said. “It took awhile for me to commit, but it was a life-changing experience. The four years flew by so fast. I would do it all over again. It’s kind of sad that I’m done there, and it’s time to move on. I’m going to miss it forever. There’s nothing like it.”

The members of the Chilton Auburn Club also took care of some business during the banquet.

The club has $250,568.23 invested in its endowed scholarship program, which is the third-highest amount of the 100 or so Auburn clubs across the nation. The club awards a $5,500 scholarship to a local senior planning to attend Auburn University each year.

Due to growth in the endowment fund, the club will soon begin awarding two scholarships each year instead of just one.