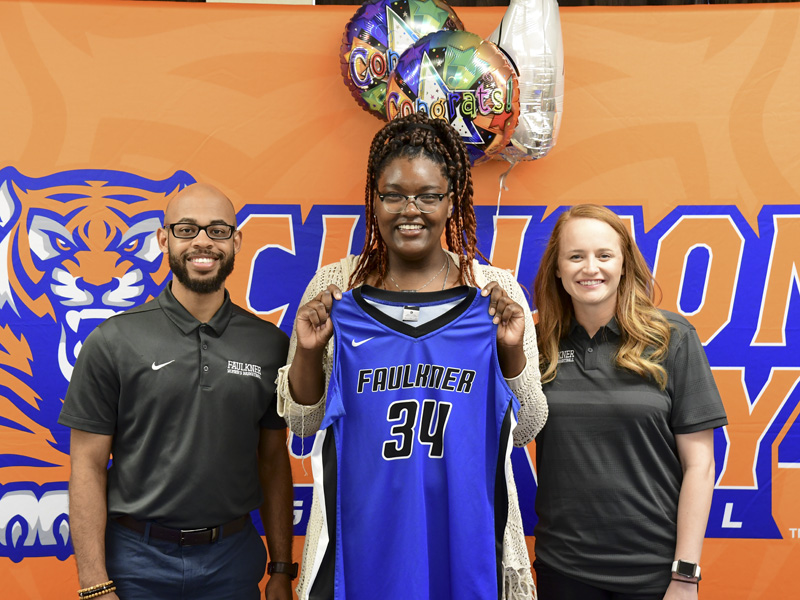 One look at Kiara Steele and she looks like a basketball player, which makes it no surprise that she signed to continue her playing career at Faulkner University in Montgomery during a ceremony on April 30.

“I am just so excited to have this opportunity to further my education through sports,” Steele said. “The campus is awesome.”

However, her size is not the sole thing that convinced the Faulkner University coaching staff that she was the right fit for their program.

“What really matters to me is having someone who’s going to come in and work hard every day,” first-year Faulkner JV head coach Kayla Tillman said.

According to Tillman, it was all of the other attributes Steele possesses that stood out during her tryout. 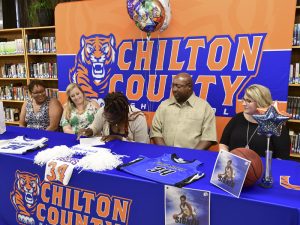 Steele was surrounded by family and friends in the CCHS library during the ceremony. (Photo by Anthony Richards)

“You could tell that she had really hard work ethic,” Tillman said. “Even if she wasn’t the best out there, she was still out-working everybody on the floor.”

It took some time before Steele heard back from Faulkner with a decision following the tryout due to coaches having to dissect and watch all the film.

However, despite having to wait for an answer Steele was confident that she made a lasting impression.

“I really thought it [tryout] went well,” Steele said. “I just put all of my ability and skill on the court, and it got me here.”

She started playing competitive basketball as an eighth grader at Jemison before transferring to Chilton County High School for the last two years.

Due to Faulkner’s proximity to Chilton County, Steele is also excited to have her family and supporters continue to follow her along the journey.