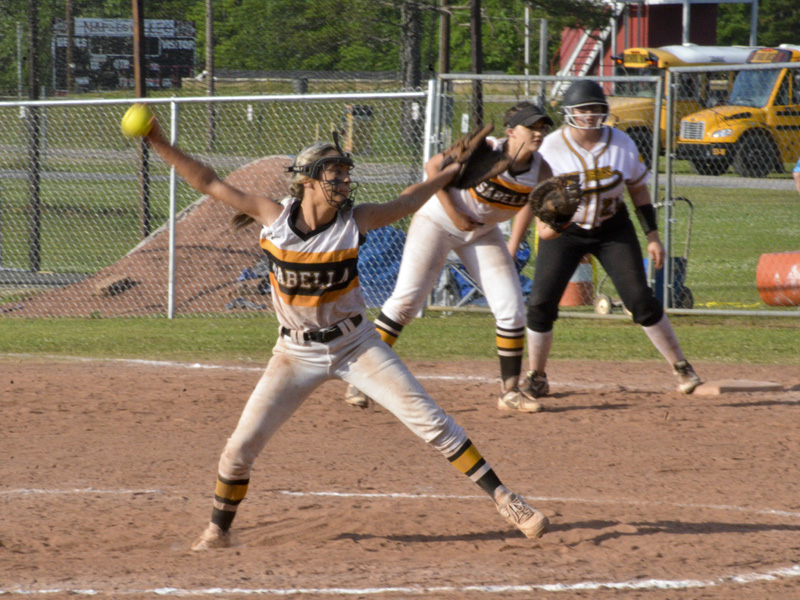 Trinity Cox of Isabella delivers a pitch. She also drove in the winning runs in the semifinal matchup against Maplesville and Game 2 of the championship series against Billingsley. (Photo by Anthony Richards)

The Isabella Mustangs won the Area 4-1A softball championship with a pair of shootout victories over Billingsley on April 30.

Both teams advance to regionals with Billingsley moving on as the area runner-up.

Maplesville entered the tournament as host and the top seed with a record of 22-8.

However, the Red Devils were shockingly knocked out after losing twice in one day, 7-3 to Billingsley and 5-4 to Isabella, after only losing once in area play throughout the regular season.

With Maplesville’s early exit, Billingsley and Isabella were suddenly playing with house money with a playoff spot already clinched but the area title still up for grabs.

The championship games were packed full of runs that made the scoreboard look more like a light show at times. 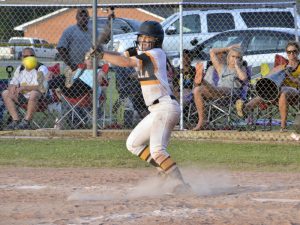 Isabella’s Mackenzie Ratliff slaps for a base hit. The Mustangs scored a combined 28 runs during the area championship series. (Photo by Anthony Richards)

The Mustangs won the deciding game 14-13 in eight innings thanks to RBI base hits by Kelsey Cox and Kristin Wilson.

Trinity Cox drove in the winning run earlier in the day against Maplesville and then did the same in Game 2 against Billingsley after being hit by a pitch with the bases loaded.

Billingsley continued to fight with three runs of its own in the bottom of the eighth inning but grounded out into a double play to put the game and the tournament on ice.

IHS jumped out to an early 11-0 lead in Game 1 of the championship series only to watch it eventually disappear, as the Bears came back to tie it up in the middle innings.

However, the Mustangs were able to successfully hit the reset button, and a three-run sixth inning helped them to win 14-11 and force a second game.

Casey Headley hit a home run for Billingsley in Game 2 of the championship series.