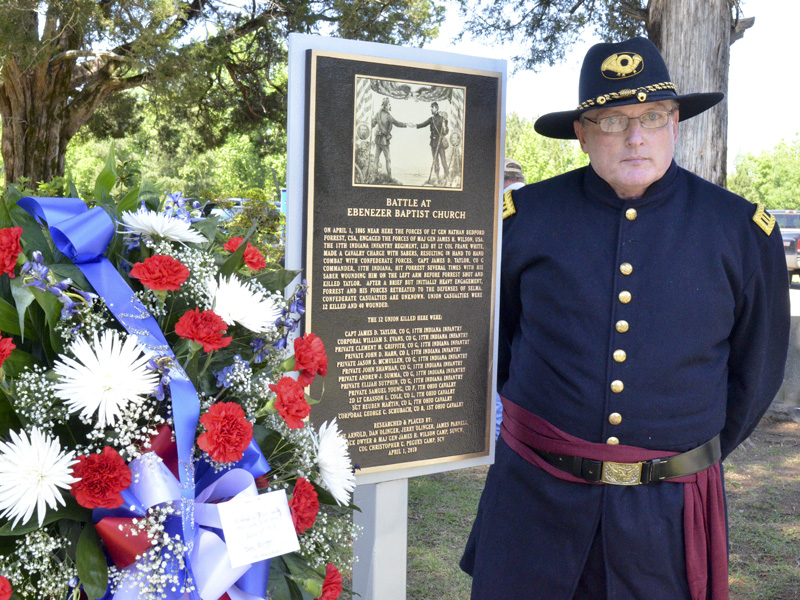 A historical monument was placed at Ebenezer Cemetery with the names of the 12 Union soldiers who died during the Battle of Ebenezer. (Photo by Anthony Richards)

The names of 12 Union soldiers who died in the Battle of Ebenezer during the Civil War are now honored with a historical marker placed at Ebenezer Cemetery in Stanton during a ceremony on April 27.

The marker bears the names of all 12 who were buried in the cemetery after the battle. However, their remains were later dug up and moved to the national cemetery in Marietta, Georgia.

About eight months ago Dan Olinger visited with Wayne Arnold. During that conversation, Arnold told him that before he died he wanted to see a monument erected for the men who died and were once buried in the cemetery.

Arnold’s dream became a reality with the ceremony.

Olinger’s family history includes members who fought on both sides during the Civil War, and as a result Olinger is the commander of the Col. Christopher C. Pegues (Confederate) Camp in Selma as well as the lieutenant commander of the Gen. James H. Wilson (Union) Camp in Prattville. 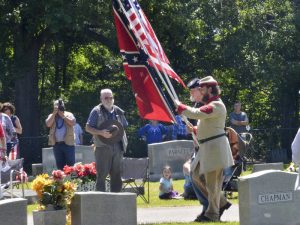 It was the first time in Alabama history that Union and Confederate camps came together to complete a joint project. (Photo by Anthony Richards)

“It’s the first time in Alabama history that a Union camp and a Confederate camp did a joint project,” Olinger said. “That’s what we can accomplish together.”

Having a hand in both camps helped make Olinger the perfect man for the job of getting both sides on the same page for a common goal.

Both camps raised the money for the plaque along with assistance from local resident Jimmy Parnell.

According to Olinger, there were probably just as many Confederates that died during the Battle of Ebenezer, but there are no records to confirm an exact number.

An excellent crowd showed up to take part in the historical occasion and shared in fellowship in a picnic following the ceremony.

“Today, both Confederate and Union soldiers are looking down [from Heaven] smiling because they know when they see two camps together like this that the war is over,” Olinger said.