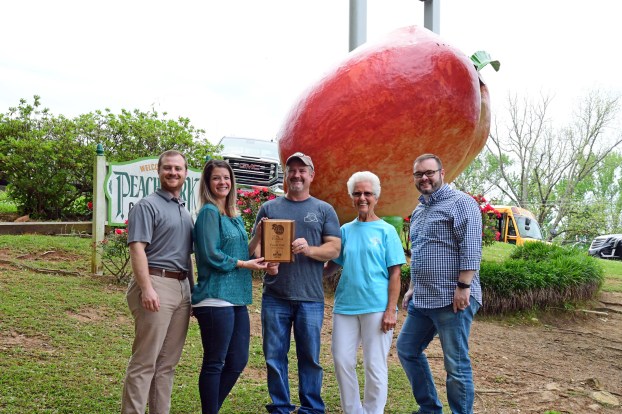 Peach Park in Clanton has been voted as one of four finalists in the Alabama Farmers Federation Bama’s Best Peach Cobbler contest.

Nominations were taken on ALFA’s website before the final four names in the contest were based on a vote.

“We are just honored to even be considered,” said Peach Park manager/owner Mark Gray. “We try our best to have the best food for our customers. We are tickled to death to be in it.”

Gray said Peach Park had been nominated for the contest before he was even made aware of it.

A panel of three judges visited Peach Park on April 25 in order to sample the restaurant’s peach cobbler for final judging. The winner will be announced on Thursday, May 2.

Gray treated each of the judges to a healthy sampling of Peach Park’s peach cobbler, complete with a scoop each of homemade peach and vanilla ice cream.

The Alabama Fruit & Vegetable Growers Association is sponsoring the contest. As such, AFVGA president Taylor Boozer Hatchett of Boozer Farms in Thorsby was selected to be one of the contest’s judges.

“As president of the association that is participating in this contest, I was asked to be a judge,” Hatchett said. “I gladly accepted. An opportunity to go and eat four peach cobblers I will not turn down. I think that I can do a good job of telling the difference between a good peach cobbler and one that is not.”

Being from Thorsby, Hatchett is familiar with Peach Park. However, she said she had never actually tried the peach cobbler at the restaurant, so she had no previous knowledge or bias of the dish before the contest.

“I have certainly eaten here before,” she said. “If I’m being honest, I have to say I’ve never eaten peach cobbler here at Peach Park. I usually go for the ice cream.”

Burnette Farms Market in Pelham, Fat Boy’s Bar-B-Que Ranch in Prattville and Ray’s Restaurant in Dothan were the other finalists in the contest.

According to ALFA, the winner of the contest will receive “$300, bragging rights, a plaque and a feature in the June ‘Neighbors’ magazine.”

Peach Park was the third stop out of the four on the judges’ list.

“The experience has been wonderful, getting to sample peach cobbler, visiting restaurants and learn their history,” Hatchett said. “One of our biggest focuses is the peach needs to be highlighted. It needs to have good peach flavor. Texture is super important. We all kind of agree what makes a good peach cobbler.”