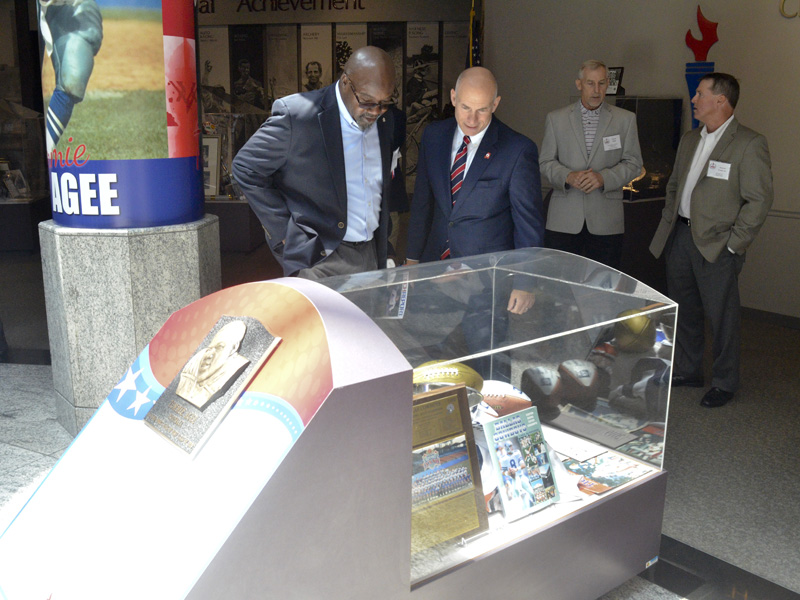 Tommie Agee looks over the memorabilia from his career in his hall of fame case alongside ASHOF executive director Scott Myers. (Photo by Anthony Richards)

Tommie Agee is now among the greats in the lore of the state’s rich athletic history.

Agee was inducted into the Alabama Sports Hall of Fame as a member of the 2019 class during a banquet at the Sheraton Birmingham Hotel on April 27.

He was born and raised in Maplesville where he was first introduced to the game of football.

“This is my home state, and that’s why it means so much,” Agee said. “It brings you to tears sometimes when you think about being honored by your home state.”

In many ways, playing sports was a family tradition for the Agees.

According to Tommie Agee, he wanted to be just like his three older brothers, who were each athletic in their own right.

During this time he modeled his game after legendary Pittsburgh Steelers running back Franco Harris.

Playing for Maplesville High School was where he made a name for himself and captured the interest of Auburn University. 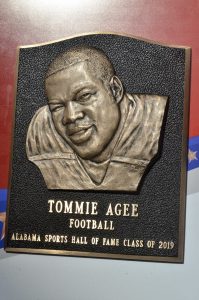 A plaque of Tommie Agee will be enshrined at the Alabama Sports Hall of Fame in Birmingham. (Photo by Anthony Richards)

“We had a small football team, but we also had some guys that could naturally go and get it,” Agee said.

The transition to the college level was a “culture shock” for Agee going from the small rural town of Maplesville to the big stage of Auburn and playing in the Southeastern Conference.

“Maplesville prepared me for what was to come, because one thing that I learned was playing as a team,” Agee said. “I knew that my teammates came first and I wanted to do anything for them. That same philosophy followed me all the way through college and the pros.”

He also underwent a position change at this time going from a running back in high school to more of a fullback role in college.

“Thank God I had some great coaches, such as Bud Casey who taught me the fundamental principles of blocking,” Agee said. “I took what he taught me and used it to the very best of my ability.”

Mastering the technique of blocking resulted in him being drafted in the fifth round of the 1987 NFL draft by the Seattle Seahawks.

“I thought going from Maplesville to Auburn was a long way from home, but going to Seattle, Washington, was even longer,” Agee chuckled.

He played six seasons in the NFL, which included playing for the Dallas Cowboys during their Super Bowl runs in 1992 and 1993.

“Dallas is where I found my niche,” Agee said. “I fell in love with the plays and the coaches. Jimmy Johnson reminded me so much of Pat Dye in the way that he worked us to death.”

Agee still tries to stay connected with the program by attending at least a couple of Maplesville games every year.

“Maplesville amazes me every year,” Agee said. “Coach [Brent] Hubbert is doing a great job over there and his coaching philosophy seems to fit well with those kids. You can tell that not just by their winning, but also in how they conduct themselves on the field.”