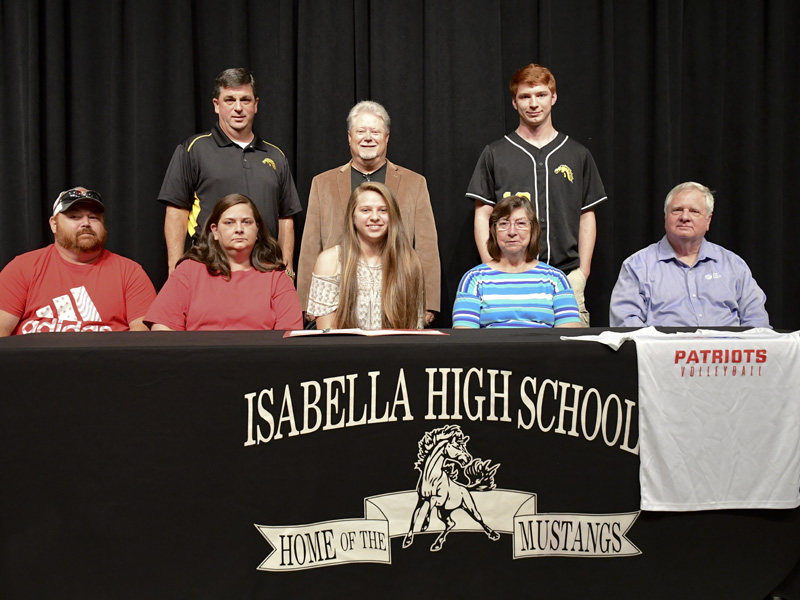 Elizabeth Alstott of Isabella signed to play volleyball at Wallace Community College in Selma during a ceremony on April 23. (Photo by Anthony Richards)

Elizabeth Alstott is now preparing for the next stage in her journey after signing to play volleyball at Wallace Community College in Selma during a ceremony at the Isabella High School auditorium on April 23.

Alstott responded to a challenge that head coach Glen Graham gave her early in her volleyball career at Isabella High School.

He always knew that she had the natural talent to be successful but also knew that talent would not be able to come to fruition without the proper focus and dedication.

Alstott embraced the challenge head-on and in recent years has morphed into a dominant player on the court and a leader off of it.

She was named The Clanton Advertiser’s 2019 Volleyball Player of the Year and earned the scholarship opportunity as a result of her relentless hard work.

“I’m excited and a little nervous to see what the new season brings,” Alstott said. 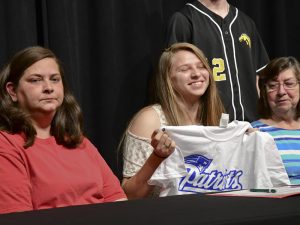 Alstott shares a laugh as she holds up a Wallace Community College T-shirt for the rest of the auditorium to see. (Photo by Anthony Richards)

“With him being there as an assistant coach, I know that he’ll be as tough on me as he has to be,” Alstott chuckled. “I don’t take it personally, because I’ve been with him for years. He’s kind of like a dad to me.”

One of the things that Alstott was known for with the Mustangs was her ability to play multiple positions on the court.

That versatility will come in handy, as she will transition from a hitter to primarily a setter’s role at the college level.

“I’m looking forward to it because it’s going to put more pressure on me, which is only going to make me work harder at it,” Alstott said. “I’ve got to get back in the groove because I haven’t set in some odd years.”

Part of the recruiting process for Alstott included going down to Wallace to take part in a tryout.

According to Graham, the tryout went very well and was a major part in winning over the rest of the coaching staff.

She played her share of sports over the years, but volleyball was the one that she always seemed to enjoy the most ever since she began playing in sixth grade. It just seemed like a natural fit.

“I’ve always felt like it was more intense that the other sports,” Alstott said. “I’m ready to see the difference in that intensity at the college level and see where it takes me.”