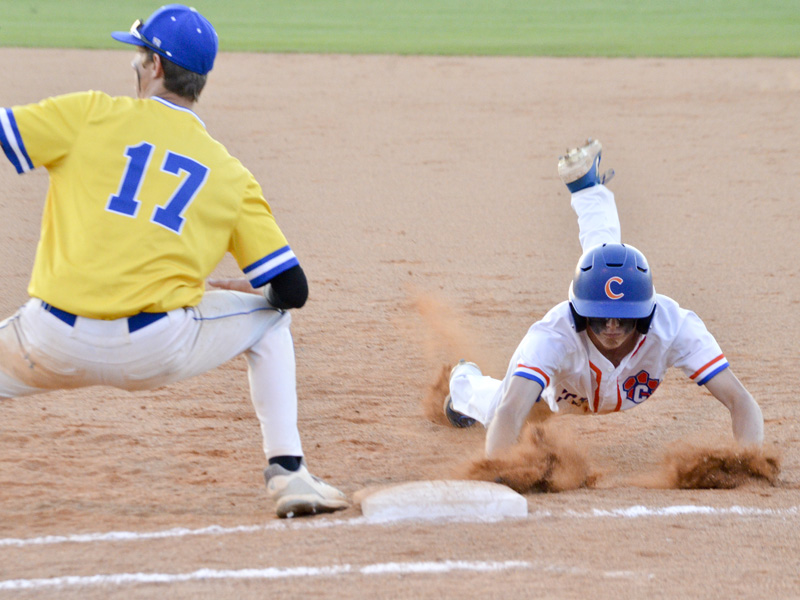 Preston Smith of CCHS dives back to first base on a pick-off throw against Beauregard in the second round. (Photo by Anthony Richards)

The Chilton County Tigers and Thorsby Rebels are the last two county teams remaining in the AHSAA baseball playoffs.

Both teams advanced to Round 3 but did so in very different paths.

The Rebels made quick work of Cottage Hill Christian with a pair of blowout victories, 12-1 and 12-2, while the Tigers needed a furious comeback against Beauregard in order to secure a seat in the next round.

CCHS trailed 8-3 heading into the seventh inning of Game 3 on April 27 but were not ready to walk off into the sunset.

The Tigers scored five runs to tie the game at 8-all following a double by Dylan Cullum.

A couple batters later, Cameron Baker stepped to the plate with the bases loaded and two outs and drove in the game-winning run with a hit in walk-off fashion.

The 9-8 win was coupled with a 6-1 victory in Game 1 that resulted in the series success for CCHS.

Pico Kohn started Game 1 for the Tigers and put forth a strong performance to go along with the CCHS batting order outhitting Beauregard 8-3.

CCHS came back to grabbed the lead midway through Game 2, but were unable to do it again in the later innings and lost 12-9 in another high-scoring affair.

Thorsby has carried its dominant form into the postseason through the opening two rounds. 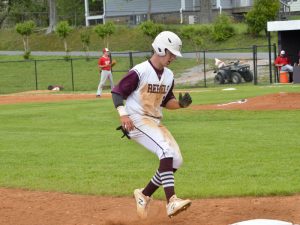 The Rebels outscored Cottage Hill Christian 24-3 in the series and outhit them 22-6 during the process.

The Jones brothers once again proved to be a potent combination on the mound.

Tanner Jones kicked things off by allowing no earned runs on two hits with four strikeouts in five innings during Game 1, and Trent Jones followed it up with a rock-solid performance of his own with just one earned run on four hits and six strikeouts in six innings of work.

Trent Jones led the charge in Game 1 going 3-for-4 at the plate with a double and a triple. He finished a home run short of the cycle and would have had a chance if the game had not been called after five innings.

Cole Hight was seeing the ball well throughout the series and finished 4-for-7 with three RBIs.

Fellow senior Tyler Jackson also had a productive series with a team-high three RBIs in Game 2.

Thorsby hosts Ariton in its third round matchup, while CCHS travels to face Briarwood Christian School in Birmingham.

Although it is a different sport, the Thorsby and Ariton matchup has an interesting subplot. Ariton was the team that knocked Thorsby out of the postseason in football.

THS baseball looks the part in Round 1