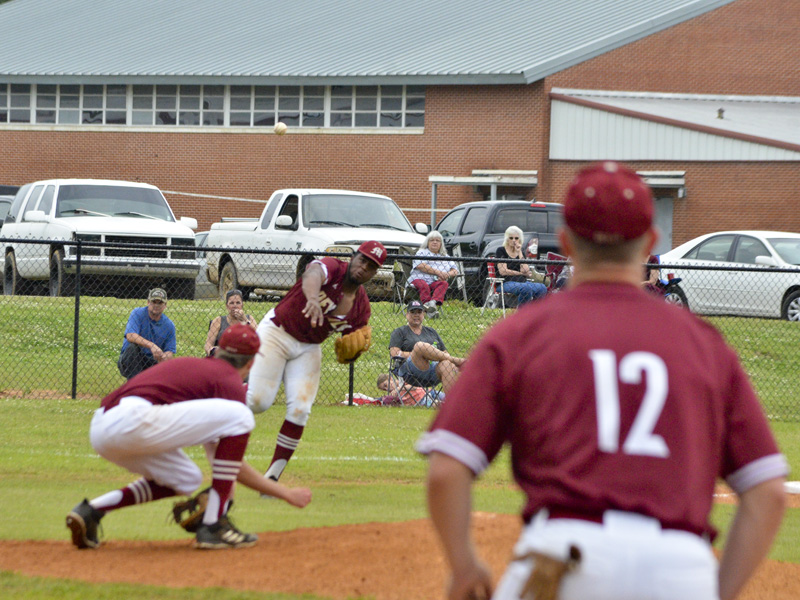 Maplesville’s Christin Brown fires to first base on a groundout against Sweet Water in the second round on April 25. (Photo by Anthony Richards)

Maplesville’s baseball season has come to an end after losing 7-4 and 17-3 to Sweet Water in Round 2 of the AHSAA Class 1A playoffs in April 25.

The Red Devils struggled to slow down the Sweet Water offensive attack, which had its way with MHS pitching throughout the series.

Sweet Water opened up Game 1 with a pair of runs in the first inning only to be answered by a run for the Red Devils in the bottom half.

However, after a solid start Jackson Abbott began to be hit more routinely by the Sweet Water batting order. 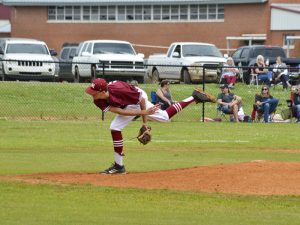 A bases-clearing triple helped extend the Sweet Water lead to 6-1 after four innings of play.

The Red Devils had chances with various runners on base during Game 1 but were seldom able to cash in those runners on the scoreboard.

A good example was in the bottom of the fourth inning after Maplesville was able to draw a couple of walks and things were looking up.

However, the inning eventually came to an end and both runners were left stranded on base.

One of the highlights of the series for MHS came in the final inning of Game 1 when Christin Brown launched a three-run home run over the right field fence.

Not only did the ball make a noise coming off Brown’s bat, another thud was made when the Sweet Water right fielder ran into the fence in pursuit of the ball.

The fielder hit the fence so hard that his legs went under a loosened part at the bottom of the chain link fence to the point where his legs were sticking out the other side. He would walk it off and finish the game.

Game 2 was all Sweet Water, as they exploded for 17 runs in the contest.

Despite the loss, it was a successful season for Maplesville and head coach Justin Little advancing in the postseason in his first year at the helm.