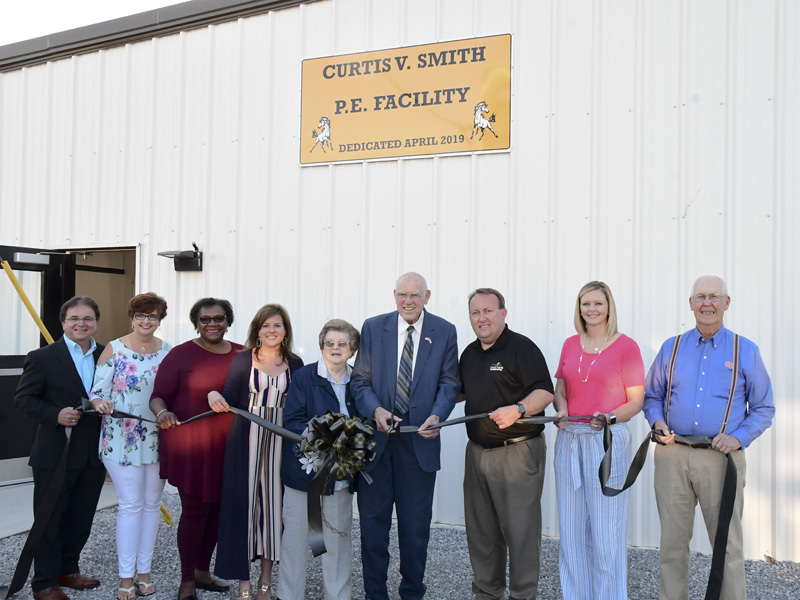 Curtis Smith cuts the ribbon during the presentation ceremony of Isabella’s new all-purpose facility. He was joined by current and former members of the Chilton County Board of Education. (Photo by Anthony Richards)

Isabella High School christened its new all-purpose facility during a ceremony on April 22.

The building will be named the Curtis V. Smith P.E. Facility in honor of the longtime Isabella resident and community leader.

“It’s a great honor to have the place where you taught to name a building after you,” Smith said. “I’m just so proud to be a part of it.”

Smith and his wife Margie both taught at Isabella, which included serving as principal at the school for six and a half years while his wife taught first grade for 23 years. He also served three terms in the Alabama House of Representatives.

It was truly a family affair over the years, as all three of his sons graduated from IHS and were there to witness the ceremony.

“I couldn’t think of a better person to name the building after,” IHS Principal Ricky Porter said.

Smith was instrumental in helping present the idea of an all-purpose building to the Chilton County Board of Education while he was still a member. 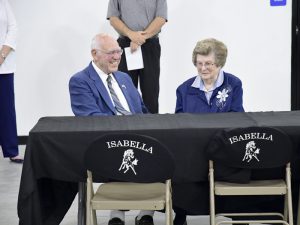 Curtis Smith shares a laugh with his wife Margie during the ceremony. (Photo by Anthony Richards)

“It fills a need,” Curtis Smith said. “It’s been a pleasure to watch it go up.”

The facility will be used to house physical education classes as well as equipment to help with the strength and conditioning process of the athletic programs.

“We’re thankful because out here in the small rural areas we don’t get a lot,” IHS Booster Club president Buddy Baker said.

According to Baker, the finishing touch on the building will be to put down a rubber floor, which has already been ordered. The goal is to have it ready in time for summer workouts.

The booster club raised about $80,000 in recent years to help pay for the construction of the building along with the Board of Education.

“It’s a big sigh of relief for us, because we started pooling our money [for the past handful of years] for a project, but we didn’t know what it would be,” Baker said. “It feels really good to see a project grow from plans all the way up.”

According to Baker, the program has really started to grow since Tate Leonard took over as athletic director two years ago.

“It’s been a long time coming,” Chilton County Superintendent Jason Griffin said. “The students are excited, and the most important thing is that they’ll have access to it now.”

Future add-ons to the facility will include a batting cage but not until the proper funds are raised.